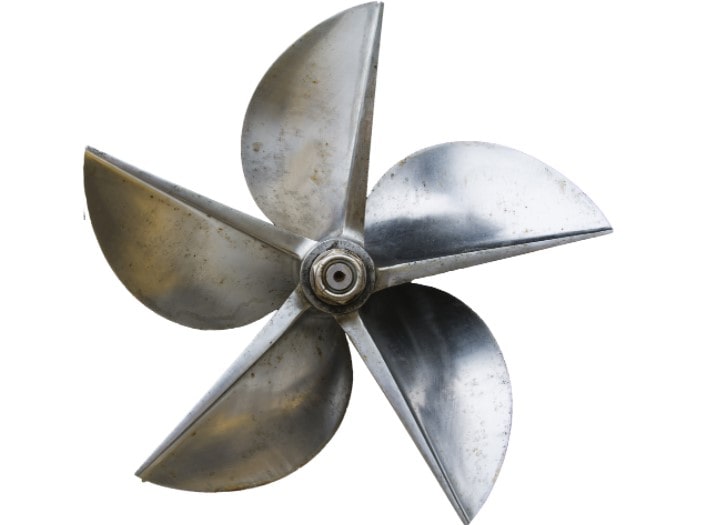 A propeller is a device consisting of a rotating shaft with propeller blades attached to it and used for mixing relatively low viscosity dispersions, liquids (low viscosity) and maintaining contents in suspension. It rotates at a very high speed (up to 8000 r.p.m.) and thus mixing operation is rapid. They are much smaller in diameter than paddle and turbine mixers.

A propeller transmits power by converting rotational motion into thrust. A pressure difference is produced between the forward and rear surfaces of the airfoil-shaped blade, and a fluid is accelerated behind the blade. The thrust from the propeller is transmitted to move the liquid through by the main shaft and finally by the propeller itself.

The system consists of a vessel fitted with the propeller. The vessel is made up of stainless steel 316L grade resistant to acids, alkalis, and abrasion having curved or flat-bottom. It has a 1.5:1 height to width ratio. The vessel is covered with a cooling jacket for better temperature control. Propellers consist of a number of blades attached to the shaft. Generally, 3-6 bladed design is most commonly used for mixing liquids, Figure in the shown below. Blades may have right or left-handed orientation. Two or more propellers are used for large and deep tanks. The size of the propeller is small and may be increased up to 0.5 m depending upon the depth size of the tank. Typically the diameter of the propeller is within the range of 0.13 – 0.67 of the tank diameter. Small size propellers can rotate up to 30000 r.p.m. and produce longitudinal movement. Radial agitators consist of propellers that are similar to marine propellers. They consist of two to four blades that move in a screw-like motion propelling the material to be agitated parallel to the shaft. A propeller agitator is shaped with blades tapering towards the shaft to minimize centrifugal force and produce maximum axial flow. Propeller agitators are popular for simple mixing applications.

(i) They need to provide a wide range of operating speeds and hence shearing rates.
(ii) They must ensure complete (homogeneous) mixing.
(iii) They should be economical in use
(iv) They must provide effective mixing in the dispersion of solids in the production of
pharmaceutical suspensions without changing particles size.
(v) They must allow for different mounting typos such as off-center and side-entry.
(vi) They must be easy to clean after use.

The liquids to be mixed are transferred to the mixing vessel through pumping. When the propeller is started a vortex is formed due to centrifugal force imparted to the liquid by the propeller blades, shown in the future below. This action causes liquid bulk to back up around the sides of the vessel and creates a depression at the center around the shaft. The liquid flow patterns achieved by propellers are axial and may be directed towards the top or towards the bottom of the vessel depending upon whether the drive is rotated clockwise or anticlockwise. As the speed of rotation is increased air may be sucked into the fluid by the formation of a vortex. The vortex formation is suppressed to considerable levels by fitting baffles in a vertical position into the vessel. The vertical propeller mixer consists of three blades of suitable size depending upon the diameter of the vessel. Horizontal or inclined propellers or marine propellers can also be used on side-entry mixers. Propellers are mounted on the impeller shaft inclined at an angle to the vessel axis to improve the mixing. It provides good blending capability in small batches of low to medium viscosity liquids.

(i) Propellers are used when high mixing capability is required.
(ii) They are very effective for mixing liquids having maximum viscosity of 2 Pa.s or
slurry with up to 10% solids of fine particle size.
(iii) They are effective in mixing gas-liquid dispersions at a laboratory scale.
(iv) Propellers increases the homogeneity of materials,
(v) Can be used in two different patterns for drying and pressing

(i) Propellers are not effective with liquids of viscosity greater than 5 Pa.s. For example,
glycerin and castor oil.
(ii) Need to be operated at high speed to avoid solid settlings in reactor vessels.
(iii) They need to be operated at low speeds if drying is an additional objective.
(iv) Vortex causes frothing and possible oxidation.

(i) Propellers are used when huge quantities of liquids and dispersions are to be mixed.
(ii) These are useful for mixing liquids having a viscosity of about 2 Pa.s.
(iii) These can handle corrosive materials with a glass lining.