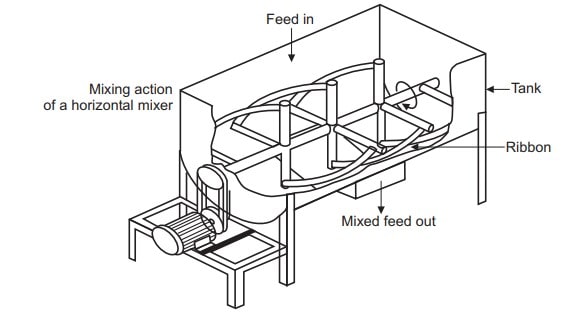 A ribbon mixer blender is a light-duty blender mainly used for easy-to-mix powder components that are pre-processed, like dried granules and pre-sieved powders. It is a low-shear mixer and is mostly used for solid-solid mixing. Solid-liquid mixing can also be achieved when a high shearing force is not desired. It occupies less headroom space than large volume mixing.

Ribbon blenders operate on combined convection and diffusion mechanisms. Convective mixing is the macro movement of large portions of the solids. Convection mixing occurs when the solids are turned over along the horizontal axis of the agitator assembly. The diffusion mixing involves the micromixing that occurs when individual particles are moved relative to the surrounding particles. In the ribbon, blender diffusion occurs when the particles in front of the ribbon are moved in one direction while nearby particles are not moved or lag behind. Together, these two types of action result in the mixing and blending of solids.

A ribbon blender consists of a U-shaped horizontal trough containing a double helical ribbon agitator that rotates within, Fig. 8.3. The agitator’s shaft is positioned in the centre of the trough and has welded spokes on which the helical ribbons (also known as spirals) are welded. Since the ribbon agitator consists of a set of inner and outer helical ribbons, it is referred to as a “double” helical ribbon agitator. The gap between the ribbon’s outer edge and the internal wall of the container ranges from 3 to 6 mm depending on the application. The internal and external ribbon spirals are pitched to move material axially, in opposing directions as well as radially. This combination promotes fast and thorough blending. The agitator shaft is located within the blender container. A spray pipe for adding liquids is mounted above the ribbons. For materials that tend to form agglomerates during mixing, high-speed choppers can be provided for the disintegration of the agglomerates.

The ribbon blender is powered by a drive system comprised of a motor, gearbox, and couplings. These blenders are generally powered by a 10 – 15 HP motor for 1000 kg of product mass to be blended. The power requirement may range from 3 – 12 kW/m3 depending on the products to be blended. Top speeds are in the range of 300 feet/min are typical. The agitator shaft exits the blender container at either end, through the end plates bolted or welded to the container. The area where the shaft exits the container is provided with a sealing arrangement to ensure that material does not travel from the container to the outside and vice-versa. The blender assembly along with the drive system components viz. motor, gearbox, couplings, and bearing supports is mounted on a supporting frame.

The feed material is charged in the blender through nozzles or feed-hoppers mounted on the top cover of the blender. The material is loaded by typically filling 40 and 70 % of the total volume of the container. This is generally up to the level of the outer ribbon’s tip. The ribbon agitator is designed to operate at a peripheral speed (also known as tip speed) of approximately 100 m/min, depending on the application and the size of the equipment. During the blending operation, the outer ribbons of the agitator move the material from the ends to the center while the inner ribbons move the material from the center to the ends. Radial movement is achieved by the rotational motion of the ribbons. The difference in the peripheral speeds of the outer and inner ribbons results in axial movement of the material along the horizontal axis of the blender. As a result of the radial and the counter-current axial movement, homogenous blending is achieved in a short time. Blending is generally achieved within 15 – 20 min of start-up with a 90 – 95 % or better homogeneity. The particle size and its bulk density have the strongest influence on the mixing efficiency of the ribbon blender. Ingredients with uniform particle size and bulk densities tend to mix faster as compared to ingredients with variations in these attributes.

After blending, the material is discharged from a discharge valve located at the bottom of the trough. The discharge can be fitted with any of various valves, viz. slide-gate, butterfly, and flush bottom, spherical, and other types depending on the application. The operation of the valves can be manual or pneumatically actuated. Ribbon blenders can be designed for multiple discharge ports. In a ribbon blender, the material is discharged by rotation of the ribbon agitator. It is practically difficult to achieve 100% discharge in the ribbon blender. Higher clearances between the external periphery of the outer ribbon and the container can result in unmixed spots at the trough bottom and can lead to discharge problems.

(i) Ribbon blenders are used to blend large volumes of dry solids.
(ii) It can blend and mix dry free-flowing powders as well as wet materials.
(iii) It is best suited for mixing bulk drugs, formulation compositions, chemicals, and cosmetic powders.
(iv) It is used in the dry blending of components in capsule formulations.
(v) It can also be used in the lubrication of dry granules in large quantities.
(vi) It heats, cools, and dries materials during the process.
(vii) It is employed in coating solid particles with small amounts of liquids to produce formulations.
(viii) It has applications in the mixing nutraceuticals, cosmetics, and veterinary formulations.
(ix) Its other applications include blending and mixing of abrasives, engineered plastic resins, pesticides and herbicides, animal feeds, epoxy resins, pet foods, bakery premixes, pigments, cake mixes, instant drink blends, fertilizers, plastic powders, carbon black, fire retardants, polyethylene, chemicals, gypsum, PVC compounding, leaning compounds, instant breakfast cereals, spice blends, and dietary supplements.