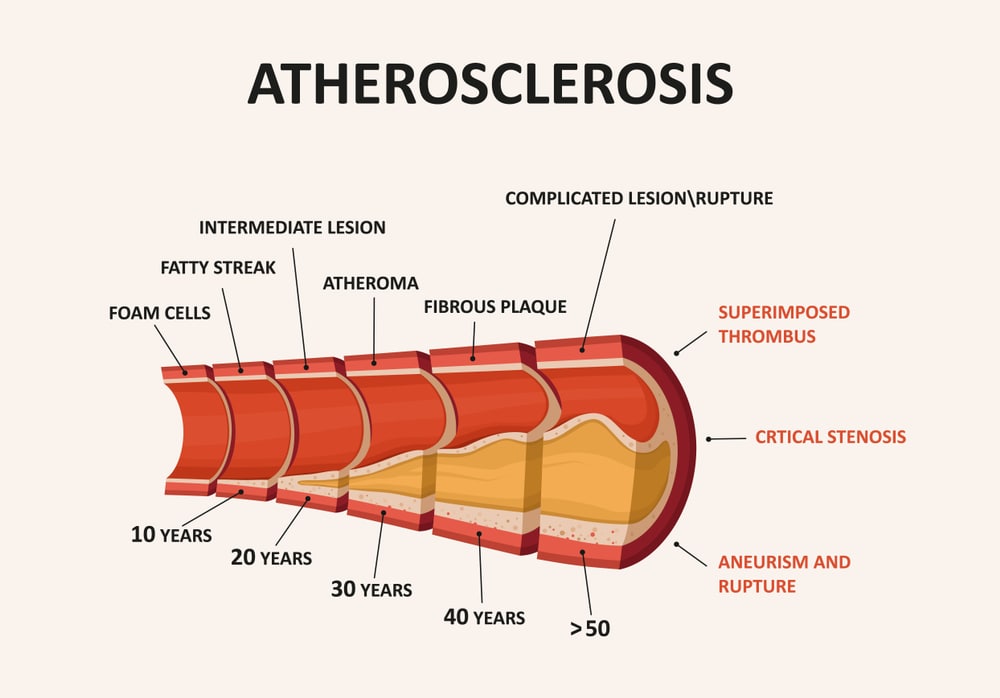 Atherosclerosis (or arteriosclerotic vascular disease) is a condition where the arteries become narrowed and hardened due to an excessive buildup of plaque around the artery wall. Plaque is made up of fat, cholesterol, calcium, and other substances found in the blood. Over time, plaque hardens and narrows arteries. The disease disrupts the flow of blood around the body, posing serious cardiovascular complications. Atherosclerosis can lead to serious problems, including heart attack, stroke, or even death.

Healthy arteries are flexible and elastic, but over time, the walls in arteries can harden, a condition commonly called hardening of the arteries. The word atherosclerosis is of Greek origin and literally means focal accumulation of lipid and thickening of arterial intima (sclerosis [hardening]).

Atherosclerosis can affect any artery in the body, including arteries in the heart, brain, arms, legs, pelvis, and kidneys. As a result, different diseases may develop based on which arteries are affected.

Certain factors that can damage the inner area of the artery (endothelium) and can trigger atherosclerosis include:

• High levels of sugar in the blood

Areas of the artery that are damaged are likely to have plaque buildup which can eventually break open. When the plaque breaks open, blood cell fragments called thrombocytes (or platelets) accumulate in the affected area. These fragments can then stick together, forming blood clots.

High triglycerides: Most fat in food and in the body takes the form of triglycerides. Blood triglyceride levels above 400 mg/dL have been linked to coronary artery disease in some people. Triglycerides, however, are not nearly as harmful as LDL cholesterol.

Diabetes: Patients with poorly controlled diabetes, who frequently have excess blood glucose levels, are much more likely to develop atherosclerosis.

Obesity: Excess weight increases the strain on the heart and increases the risk of developing atherosclerosis even if no other risk factors are present.

Very low-density lipoprotein (VLDL) is produced by the liver and is changed into LDL by means of lipoprotein lipase. This process removes triglycerides from VLDL by hydrolysis, releasing fatty acids and leaving greater numbers of cholesterol, thus increasing the density of the molecule.

The LDL crosses the endothelium and moves into the extracellular matrix where it is oxidized (by the aforementioned steps above), and forms oxidized LDL (OxLDL).

Since the LDL is now oxidized due to aldehydes and lipid hydroperoxides, the modified apolipoprotein B in LDL attaches to macrophage scavenger receptor cells. At this stage, OxLDL has a very high number of cholesterol and cholesterol esters, since it lost antioxidants, triglycerides, and fatty acids in previous steps. Macrophages are supposed to remove cholesterol by use of high-density lipoprotein (HDL) particles, but if there is too much excess cholesterol, it causes the macrophages to enlarge and fill with lipids.

Eventually, the macrophages build up and convert into lipid-laden foam cells (a collection of fatty materials and cholesterol) which die and become part of the plaque that causes atherosclerosis.

As this process continues, more and more LDL becomes trapped within the tunica intima (the innermost layer of the arterial wall) creating a pool of cholesterol called a fatty streak.

The smooth muscle cells move from the tunica media (the thickest layer of the artery) to the tunica intima and become proliferated by way of released cytokines (proteins that help with immunity) within the macrophages. Major atherosclerosis causing plaque has a fibrous cap, which sticks out into the artery, causing vasoconstriction, and blocking blood flow (the plaque always forms in the lumen, which is between the intima and the musculature of the wall.

Atherosclerosis does not usually produce symptoms until blood circulation becomes restricted or blocked, leading to cardiovascular disease (CVD). The type of cardiovascular disease and its associated symptoms depends on, where the blockage occurs. The first signs of atherosclerosis can begin to develop during adolescence, with streaks of white blood cells appearing on the artery wall. The symptoms of the disease depend on, which arteries are affected.

These arteries provide blood to the brain. When the blood supply is limited, patients can suffer a stroke and may experience:

These arteries provide blood to the heart, when the blood supply to the heart is limited, it can cause angina and heart attack. Symptoms include:

If one of the plaques in coronary arteries ruptures, it could create a blood clot. If the blood clot blocks the supply of blood to heart, it will cause to have a heart attack. Symptoms of a heart attack include:

If atherosclerosis weakens the walls of blood vessels, it can lead to the formation of an aneurysm (a bulge in a blood vessel). If the aneurysm grows too large, there is a danger. It will rupture, which can cause potentially fatal internal bleeding and organ damage.

An aneurysm can develop anywhere in the body, but the two most common types of aneurysm are:

• A brain aneurysm (also known as a cerebral aneurysm), which develops inside the brain.

• An aortic aneurysm, which develops inside the aorta (a large blood vessel that runs down the abdomen and transports blood away from the heart).

If an aortic aneurysm ruptures, the person will experience sudden and severe pain in the middle or side abdomen. In men, the pain can spread down into the scrotum (the sac containing the testicles).

Symptoms of a ruptured brain aneurysm usually begin with a sudden and severe headache, which has been described as being hit on the head.

These supply blood to the kidneys; if the blood supply becomes limited, there is a serious risk of developing chronic renal failure, and the patient may experience:

The arteries to the limbs, usually the legs, are blocked. The most common symptom is leg pain, either in one or both legs, usually in the calves, thighs, or hips. The pain may be described as one of heaviness, cramp, or dullness in the leg muscles. Other symptoms may include:

A physician may be able to make a diagnosis of atherosclerosis during a physical exam by means of a stethoscope and gentle probing of the arteries with the hand (palpation) to find signs of narrowed, enlarged, or hardened arteries, including A weak or absent pulse below the narrowed Depending on the results of the physical exam, more diagnostic tests, including:

Blood tests: Blood tests can detect increased levels of cholesterol and blood sugar that may increase the risk of atherosclerosis.

Doppler ultrasound: It is a special ultrasound device (Doppler ultrasound) used to measure blood pressure at various points along the arm or leg. These measurements can help doctors measure the degree of any blockages, as well as the speed of blood flow in arteries.

Electrocardiography (ECG): An electrocardiogram measures the electrical activity of the heart. This test can measure how well the heart is functioning and can often detect the presence of heart disease.

Cardiac catheterization and angiogram: This test can show if coronary arteries are narrowed or blocked. A liquid dye is injected into the arteries of the heart through a long, thin tube (catheter) that is fed through an artery, usually in the leg, to the arteries in the heart. As the dye fills arteries, the arteries become visible on X-ray, revealing areas of blockage.

Ultrasound: An ultrasound scanner uses sound waves to build up a picture of the inside of the body. This can be used to measure blood pressure at different points in the body. Any variation in pressure could point to the site of a blockage in arteries. Ultrasound tests can also be used to study the larger arteries.

Lifestyle changes: Weight management, physical activity, and a nutritious diet will be the focus of the improvements. A doctor may advise eating meals high in soluble fiber while limiting saturated fats, salt, and alcohol consumption.

The medications may be prescribed:

Surgery: Surgical techniques such as angioplasty or coronary artery bypass grafting may be used to treat severe cases of atherosclerosis (CABG). Angioplasty is widening the artery and removing the obstruction, allowing blood to flow freely again. CABG is another type of surgery that improves blood flow to the heart by bypassing a constricted coronary artery with arteries from other sections of the body.

Angioplasty and stent placement: Angioplasty is a technique that involves inserting a small device into a constricted blood vessel. Cardiologists implant a metal wire frame as scaffolding during most of these procedures to help keep the artery open. A stent is a name for this device. With a stent in place, a blocked artery is less likely to seal up.

A small, thin tube (called a catheter) with a tiny balloon at its tip is used in balloon angioplasty, also known as percutaneous transluminal coronary angioplasty (PTCA). A big conduit in the arm or leg is used to insert the tube into the bloodstream. The cardiologist guides the tube into the heart, where it is placed into a restricted coronary artery, using an X-ray to monitor its progress. After that, the little balloon is inflated to enlarge the confined space.

Endarterectomy: Fatty deposits on the walls of a restricted artery may need to be surgically removed in some circumstances. Carotid endarterectomy is a procedure that involves the removal of arteries in the neck (the carotid arteries).

Bypass surgery: A graft bypass can be produced utilizing a vessel from another area of the body or a synthetic fabric tube in this case. This permits blood to flow around the artery that is obstructed or constricted.

Drugs used in the treatment of atherosclerosis