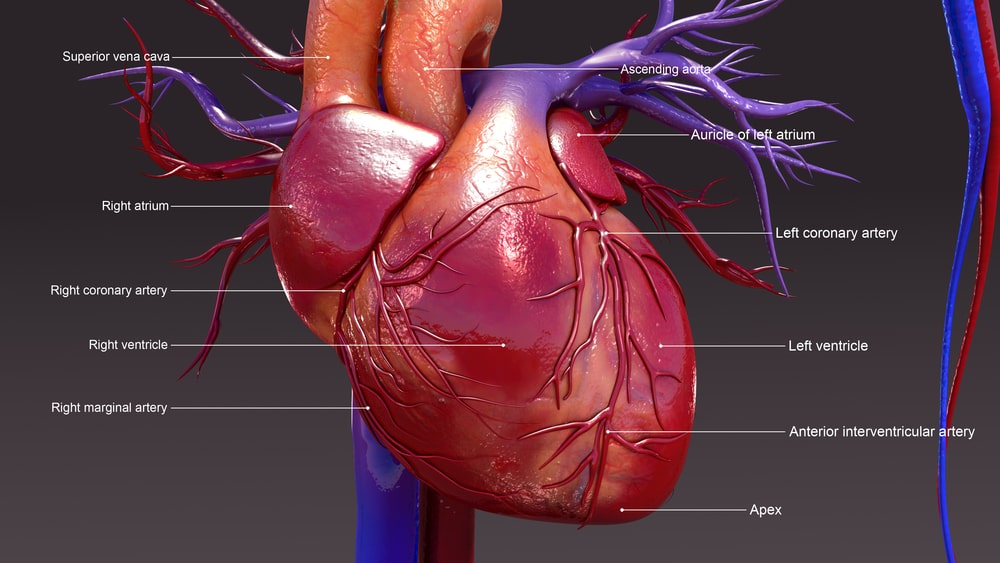 The Conduction System of the Heart: The heart is a muscular organ the size of a closed fist that is positioned in the chest behind the sternum and above the diaphragm, between the lungs. It is encased in the pericardium. The aorta, pulmonary arteries and veins, and the vena cava are all connected to the base of the heart on its superior end. The apex, or inferior tip of the heart, is located slightly above the diaphragm. The heart’s base runs parallel to the body’s midline, with the apex pointing to the left. Because the heart is angled to the left, around two-thirds of the heart’s mass is located on the left side of the body, while the remaining one-third is located on the right.

The heart is the pump that is responsible for maintaining adequate circulation of oxygenated blood around the vascular network of the body. It takes in deoxygenated blood through the veins and delivers it to the lungs for oxygenation before pumping it into the various arteries.

Anatomy of the Heart

Myocardium: The myocardium is the thick middle layer of the heart wall and consists of numerous layers of cardiac muscle fibers that wrap around the heart. Contraction of the myocardium pumps blood out of the heart into the aorta and pulmonary trunk arteries.

Endocardium: The endocardium is the simple squamous endothelium layer that lines inside the heart. The endocardium is very smooth and is responsible for keeping blood from sticking to the inside of the heart and forming potentially deadly blood clots. The thickness of the heart wall varies in different parts of the heart. The atria of the heart have a very thin myocardium because they do not need to pump blood very far, but only to the nearby ventricles. The ventricles, on other hand, have a very thick myocardium to pump blood to the lungs or throughout the entire body. The right side of the heart has less myocardium in its walls than the left side because the left side has to pump blood through the entire body while the right side only has to pump to the lungs.

Heart Valves: The heart functions by pumping blood both to the lungs and to the systems of the body. To prevent blood from flowing backward or “regurgitating” back into the heart, a system of one-way valves are present in the heart. The heart valves can be divided into two types: atrioventricular and semilunar valves.

Atrioventricular Valves (AV): The AV valves are located in the middle of the heart between the atria and ventricles and only allow blood to flow from the atria into the ventricles. The AV valve on the right side of the heart is called the tricuspid valve because it is made of three cusps (flaps) that separate to allow blood to pass through and flow backward. The AV valve on the left side of the heart is called the mitral valve or the bicuspid valve because it has two cusps. The AV valves are attached on the ventricular side to tough strings called chordae tendineae. The chordae tendineae pull on the AV valves to keep them from folding backward and allowing blood to flow backward.

Conduction System of the Heart

The conduction system begins with the heart’s pacemaker and the sinoatrial (SA) node, a tiny bundle of cells. The SA node is found in the right atrium’s wall, below the superior vena cava. The SA node is in charge of regulating the heart’s overall rhythm and directly instructs the atria to contract. The signal from the SA node is picked up by the atrioventricular (AV) node, which is a mass of conductive tissue.

The AV node is positioned in the inferior section of the interatrial septum in the right atrium. The signal sent by the SA node is picked up by the AV node and transmitted to the bundle of His. The AV bundle is a conductive tissue strand that goes from the interventricular septum to the interatrial septum. In the interventricular septum, the AV bundle splits into left and right branches, which continue flowing through the septum until they reach the apex of the heart. There are numerous bundle branches on the left and right. Purkinje fibers, which transport the signal to the ventricle walls, cause cardiac muscle cells to contract in a coordinated manner, allowing blood to be efficiently pumped out of the heart.