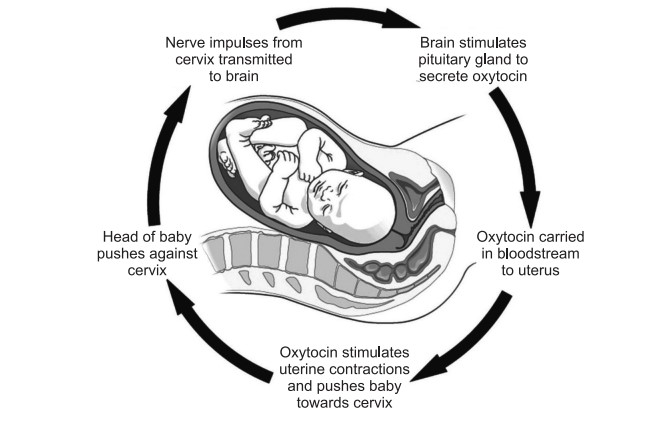 Negative feedback loops are seen in nearly all physiologic adaptive responses. These processes work to return the system to homeostasis by causing changes in the opposite direction of a perturbing factor.

If a hemorrhage produces a drop in blood pressure, sensors in blood vessels trigger brain reactions that promote an increase in cardiac pumping and blood vessel constriction. These changes result in an increase in blood pressure, which cancels out the original disruption, closing the feedback loop and returning the system to its stable state. Other instances of homeostasis include temperature management, which is critical to the body’s ability to maintain homeostasis. The skin and the brain both have thermoregulators that detect heat. The internal temperature is sensed by the hypothalamus, and the external temperature is sensed by the skin. When the external temperature outside is too cold, messages are sent from the many thermoreceptors located within the skin to the cerebellum, which leads to the hypothalamus.

The role of the cerebellum is to make the individual aware of feeling cold, which may cause voluntary behavioral changes such as putting on more layers of clothing or a coat Once the message is received by the hypothalamus, a series of reactions follow. The first of which is the hypothalamus, which secretes thyroid-releasing hormone (TRH). This hormone’s target is the anterior lobe of the pituitary gland. When the TRH reaches its target, it releases Thyroid Stimulating Hormone (TSH) which enters the bloodstream and stimulates the thyroid gland to produce thyroxin. The role of thyroxin is to increase cellular metabolism in order to generate heat. This hormone also inhibits vasoconstriction, the process in which blood is diverted from the skin in order to conserve heat by keeping it deep within the body. Sweating is also reduced to keep the surface of the skin dry, thus preventing heat loss. In addition to all of these processes, the erector pilli muscles contract, causing the skin hairs to stand erect. This traps air between the hairs and the skin and creates a layer of insulation, therefore keeping the body warmer. In addition, the phenomenon of shivering is displayed, and the bodies’ metabolic rate is increased.

When the body temperature rises, messages to the hypothalamus are transmitted in the same manner they are when the body is cold. This increases perspiration, which releases heat through water, and the water on the skin evaporates, allowing the body to cool down. Vasodilation is also seen. In order to remove heat, blood is sent to the skin in this case. The erector pilli muscles relax, allowing the skin hairs to fall out and the metabolic rate of the body to slow down. Because the messages conveyed for each of the environmental states are distinct, the reactions are also different.

Another critical part of homeostasis is water balance, which must be maintained within strict parameters. The following sequence of events is used to control the water balance. The hypothalamus’s osmoreceptors sense the state of fluid balance in the organism. If the fluid balance is too low, the hypothalamus will try to restore it by retaining more water in the body. The hypothalamus will react by excreting more water from the body if the body’s water concentration is too high. When the hypothalamus detects a shift in fluid balance, instructions are delivered to the cerebellum, which causes a thirst sensation. This occurs only when the body’s water supply is depleted. In addition, the hypothalamus sends a signal to the posterior pituitary gland, which causes ADH to be secreted. In this case, the function of ADH is to enhance the permeability of the kidney’s collecting duct and, hence, the amount of water reabsorbed into the body.

Another component that contributes to equilibrium is blood glucose. The concentration of glucose in the blood is critical for the proper functioning of cells in the body, and it is influenced by a variety of internal and external factors (food and drink). When there is too much glucose in the blood, specialized receptors in the pancreas detect it. These receptors subsequently send information to the cerebellum, causing feelings of satiety (fullness), and reducing the individual’s food intake. Messages are also delivered to the Langerhans islets, signaling the start of insulin production. Insulin is generated and secreted into the capillary circulation before reaching the systemic bloodstream. Insulin has many effects, mainly consisting of increasing the intake of glucose by all the cells of the body. This action uses up surplus glucose and brings back a stable equilibrium. The insulin also aids in the conversion of glucose into a substance called glycogen in the liver, thus lowering the level of glucose in the blood and restoring equilibrium. On the other hand, if there is not enough glucose in the bloodstream, then the very same receptors, which are located in the pancreas, detect the change. Once again, a message is sent to the cerebellum, which brings around feelings of hunger, therefore increasing the consumption of food and drink. Messages are also sent to cells in the islets of Langerhans to start the production of glucagon. This glucagon is released by the islets of Langerhans into the capillary circulation. In turn, the systemic bloodstream stimulates the liver to convert stored glycogen into glucose. In addition, the liver is stimulated to start the conversion of amino acids into glucose. Therefore, the levels of glucose in the bloodstream rise and equilibrium is achieved.

The regulation of the respiratory rate is also highly influenced by homeostasis. The majority of the time, people are unaware of their breathing. This is due to the fact that breathing is an involuntary process. The medulla, a part of the brain, is in charge of involuntary breathing control. The breathing center is a region within the medulla. The breathing center is divided into sections, each of which focuses on a different component of breathing. Both the dorsal and lateral parts of the brain help with inspiration and respiration stimulation. Furthermore, the ventral area enhances both the depth and rate of breathing. The center is linked with the intercostal nerves and the phrenic nerves, leading to the diaphragm. These routes provide a method of communication between the thorax, the respiratory system, and the medulla.

The medulla is chief in maintaining a constant rate of respiration and depth. However, both external and internal stimuli can alter the rate of respiration, making it higher or lower than the norm. The main influence of this is the level of carbon dioxide in the bloodstream. If the concentration of carbon dioxide in the bloodstream increases, then chemoreceptors located within both aortic and carotid bodies become aroused. Medulla receives sensory impulses from chemoreceptors, and integrated impulses are sent to the intercostal muscles and the diaphragm through phrenic and intercostal nerves. This causes them to contract and relax more quickly and therefore increase the breathing rate, in order to introduce more oxygen to the bloodstream and bring back the equilibrium of both oxygen and carbon dioxide levels in the bloodstream. This process is an example of negative feedback.

In addition to controlling breathing rate, the medulla also regulates heart rate. The following is the standard process for regulating the heart rate. Special receptors in the muscles send impulses to the medulla when an individual exercises. The medulla secretes epinephrine and norepinephrine in response to these messages. These two substances combine and travel through the nervous system until they reach the Sinoatrial node, which is located within the heart. It controls the electrical activity of the body in the same way that a pacemaker does. These substances stimulate the Sino-atrial node, causing it to create more electrical energy and increase heart rate.

When exercise is stopped, however, the muscles send more impulses to the medulla, which responds by secreting the acetylcholine hormone. This hormone lowers the heart rate by decreasing the electrical impulses from the Sino-atrial node, resulting in a lower heart rate. Furthermore, the medulla is capable of detecting additional stimuli that induce an increase in heart rate. Emotional tension is among them. The medulla also receives information from the thalamus, which tells the medulla about the stressor in this case. This is with the information from the nervous system thrown in for good measure. The combination of the two would allow for the finest potential response to be elicited. Homeostatic processes are controlled by negative feedback, and hence, these systems occur more commonly within the body.

The response to disruptive forces is in the same direction as the force; thus tending to increase the instability of the system. Positive feedback loops are almost always maladaptive or harmful and are often termed vicious cycles, downward spirals, or decompensation states.

These states can lead to death if not interrupted by treatment. In advanced shock, for example, the increased rate and pumping force of the heart eventually increase the demand of the heart muscle for oxygenated blood. The gap between oxygen supply and demand widens, and cardiac failure results. Positive feedback systems generally control infrequent conditions such as ovulation, childbirth, and blood clotting.

The stimulation of a baby sucking its mother’s breast leads to the secretion of oxytocin into the mother’s blood, which leads to milk being available to the baby via the breast. The mother’s production and release of oxytocin ceases when the baby stops feeding.