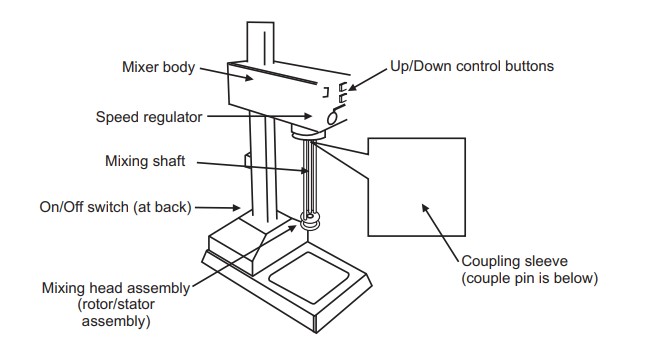 The Silverson Emulsifier mixer has been the leader in high shear mixing for over 60 years. The Silverson high-speed shear mixer is used for mixing liquid/liquid or liquid/solid mixtures at speeds up to 8000 r.p.m. The mixer body is raised or lowered electrically. It stops automatically at the higher and lower limits of movement. It has several accessories with the mixer, which can be interchanged depending on the mixing conditions required and the material being mixed.

The principle of the Silverson mixer is based upon shearing force. It produces intense shearing forces and turbulence by the use of high-speed rotors. Circulation of material takes place through the head by the suction produced in the inlet at the bottom of the head. Circulation of the material ensures the rapid breakdown of the dispersed liquid into smaller globules.

It consists of long supporting columns and a central portion, Figure is shown below. The central portion consists of a shaft that is connected to the motor at one end and the other to the head. Head carries turbine blades. Blades are surrounded by a mesh, which is further enclosed by a cover having openings. It consists of the following other accessories:

The precision-machined Silverson work head generates exceptionally high shear rates in a three-stage process that rapidly homogenizes the product to the required uniformity.

(i) The high-speed rotation of the rotor blades within the precision-machined mixing work head exerts a powerful suction, drawing liquid and solid materials into the rotor/stator assembly, shown in Figure (a).
(ii) The centrifugal force drives the material towards the periphery of the work head where they are subjected to a milling action in the precision-machined clearance between the ends of the rotor blades and the inner wall of the stator, shown in Figure (b).
(iii) Finally the intense hydraulic shear wherein the materials are forced at high velocity out through the perforations in the stator, then through the machine outlet, and along with the pipework. At the same time, fresh materials are continually drawn into the work head, maintaining the mixing and pumping cycle, shown in Figures (c and d).

(i) It is efficient and rapid in operation and is capable of reducing mixing times by up to 90%.
(ii) It is a speedy, versatile, self-pumping, aeration-free, and efficient shear mixer.
(iii) It is capable of producing a fine droplet or particle size, typically in the range of 2 – 5 microns.
(iv) Being proficient it reduces operating costs.
(v) The product to pass through the homogenizer at a much faster rate, normally in a single pass.
(vi) Being versatile it allows performing the widest range of mixing applications.

(i) It requires feed to be premixed and of uniform and fine globule or particle size.
(ii) It may face a problem of mesh clogging.
(iii) It requires more power.

(i) It is used to mix, emulsify, homogenize, solubilize, suspend, disperse and disintegrate solids.
(ii) It is used for the homogenization of a vast variety of products such as creams and ointments, lotions, sauces, and flavor emulsions.
(iii) A homogeneous product is rapidly produced when blending liquids are of similar or greatly varying viscosities, eliminating problems of stratification.
(iv) It is used to prepare emulsions in the range of 0.5 to 5 microns.
(v) Silverson mixers can disintegrate matter of animal, vegetable, mineral, or synthetic origin in a single operation.
(vi) It is used to uniformly mill both solid and semi-solid materials into either solution or fine suspension.
(vii) It is also used in rapid gelling. For example, solubilizing and dispersing gums, alginates, CMC, carbopols, etc., resulting in an agglomerate-free solution within minutes.