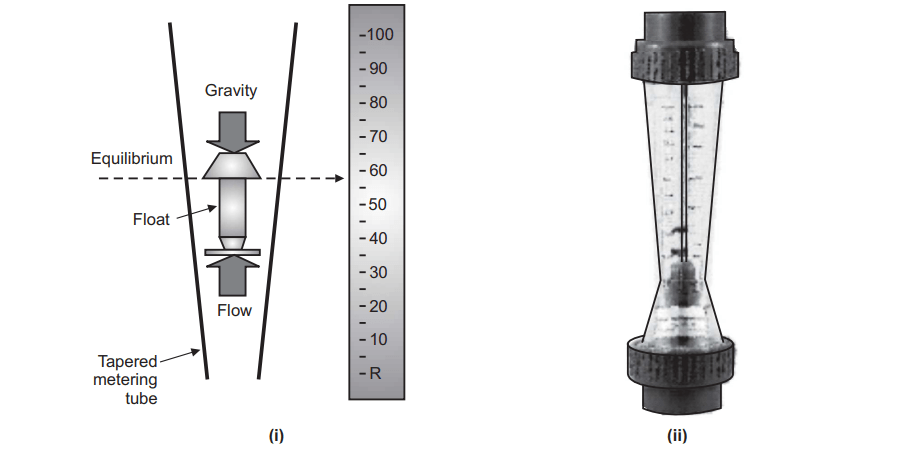 Rota Meter: A rotameter is a device that measures the volumetric flow rate of fluid in a closed tube. These are the most widely used types of variable-area flow meters. It measures flow rate by allowing the cross-sectional area the fluid travels through to vary, causing a measurable effect.

A rotameter is a tapered tube, usually made of glass, with an inside ‘float’ (made of anodized aluminum, ceramic, or plastic) that is pushed up by the flow’s drag force and drawn down by gravity. The drag force is proportional to the square of the flow speed for a given fluid and float cross-section. The float is pushed upwards by a higher volumetric flow rate through a given area, which increases flow speed and drags force. However, because the inside of the rotameter is cone-shaped, the region around the float through which the fluid flows expands, lowering the flow speed and drag force until the float’s weight is balanced mechanically.

Floats come in a variety of shapes, the most common of which are spheres and ellipsoids. The float can be grooved diagonally and colored partially such that it rotates axially as the fluid passes. Because the float will only spin if it is free, this indicates if it is stuck. Readings are normally taken at the top of the float’s widest part; in the case of an ellipsoid, the center, and in the case of a cylinder, the top. The float must not float in the fluid and must have a higher density than the fluid; otherwise, even if there is no flow, it will float to the top. The device does not require any electrical power due to its mechanical nature. If the tube is made of metal, the float position is transferred to an external indicator via a magnetic coupling. The measurement can be made remotely from the process or used for automatic control.

The falling and rising movement of a float in a tapered tube offer a measure of flow rate in these devices. Because they are based on the opposition between the downward force of gravity and the upward force of the flowing fluid, rota meters are also known as gravity-type flow meters. When the flow is steady, the float remains at the same position, which is proportional to the volumetric flow rate. On a graded scale, that position is marked. This dynamic balancing act necessitates the use of a vertical measurement tube in order to maintain the entire force of gravity.