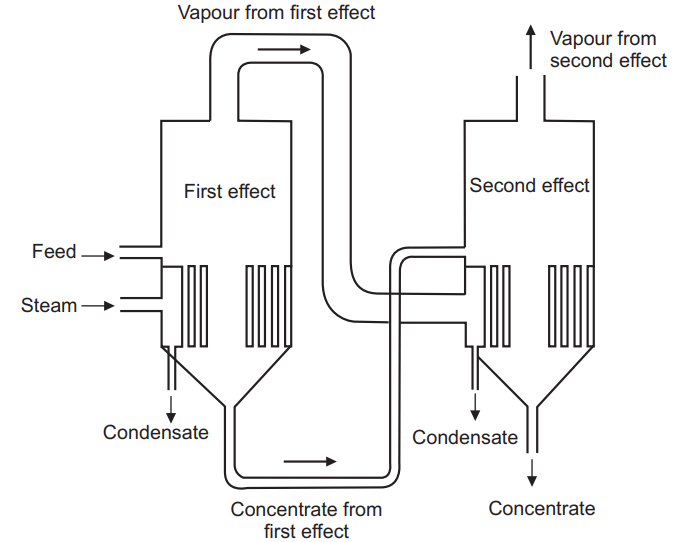 For example, consider two evaporators are connected in such a way that vapors from first evaporator are supplied to the steam chest of the following evaporator as shown in the Figure below, making up a two effect evaporator.

If the liquid is to be evaporated in each effect, and if the boiling point of this liquid is unaffected by the solute concentration, then a heat balance for the first evaporator is written as:

If the evaporators are operating in balance that all of the vapors from the first effect are condensing and in their turn evaporates vapors in the second effect. In addition, if it is assumed that heat losses are least, no boiling-point elevation of concentrated solution and the feed input is at its boiling point, then at this condition the heat transfer relation can be expressed as:

In some cases, the first effect may be at a pressure above atmospheric; or the first effect may be at atmospheric pressure and the second and subsequent effects have therefore to be under further lower pressures. Under lower pressures, the liquid feed progress is simplest if it passes from first effect to second effect, to third effect, and so on. In these situations the feed flows without pumping. This is called forward feed, showing in the Figure below. The most concentrated liquid products occur in the last effect of the process.

In backward feed evaporator the feed may pass the last effect and proceeds to the first. This is in reverse of forward feed multiple effect evaporators. In backward feed the liquid is pumped from one effect to the next against the pressure drops, showing in the above Figure. The concentrated viscous liquids are at the highest temperatures in the first effect and thus have larger evaporation capacity than forward feed systems.

In this method a hot saturated solution of the feed is directly fed to each of the three effects in parallel without transferring the materials from the one effect to the other. The parallel feed arrangement is commonly used in the concentration of the salts solution where the solute crystallizes on concentration without increasing the viscosity.

(i) It is suitable for large scale and continuous operation.
(ii) It is highly economical when compared with single effect.
(iii) About five evaporators can be attached in series.
(iv) Minimizes the energy input required to evaporate undesirable solvent.