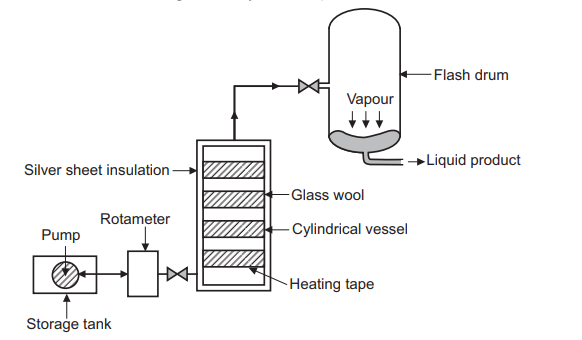 Flash distillation, also called “equilibrium distillation”, is a single-stage separation technique. Simple flash separations are very common in the industry, particularly petroleum refining. Even when some other method of separation is to be used, it is not uncommon to use a “pre-flash” to reduce the load on the separation itself.

The separation using flash distillation is based upon the flash vaporization. In flash vaporization hot liquid mixture when passes from high-pressure zone to low-pressure zone suddenly get vaporized. Reduced pressure reduces the boiling point which leads to the vaporization of the liquid. The energy for vaporization is taken up from the liquid itself, which causes a decrease in temperature. The molecules in the vapour phase with low boiling points get condensed while high boiling point molecules remain as vapour. The vapour and condensed liquid fraction remain in contact till saturation. The liquid falls at the bottom and is collected whereas vapours are further allowed to condense.

The Flash distillation unit consists of a pump attached to the feed tank from where it pumps feed at high pressure, Shown in the Figure below. This unit has a heating chamber through which the liquid mixture carrying pipe passes. The chamber is insulated to avoid heat loss during operation and maintain the desired temperature. There is a pressure control valve fitted between the heating chamber and the flash drum. The other end of the pipe directly opens into the flash drum. In single-stage flash distillation unit, liquid outlet is provided at the bottom. In case of multi stage distillation, the liquid and vapours are taken to the next unit for further distillation. When designing a flash system it is important to provide enough disengaging space in the flash drum. Flash drum can also be designed as cyclone separators.

A liquid mixture feed is pumped through a heater to raise the temperature and enthalpy of the mixture. It then flows through a valve and the pressure is reduced, causing the liquid to partially vaporize. Once the mixture enters a big enough volume, the “flash drum”, liquid and vapours get separated. Because the vapoor and liquid are in such close contact the “flash” occurs and the product liquid and vapours phases approach equilibrium. It can be operated in continuous mode as well as at a multi-level. The operational setting is synchronized in such a way that input equals the output of the process and thus the vapour and liquid proportions at any instance remain constant in the flash drum.

(i) It is not effective in separating components of comparable volatility.
(ii) It is not suitable for two-component systems.
(iii) It is not an efficient distillation when nearly pure components are required, because the condensed vapour and residual liquid contain both components to some extent.