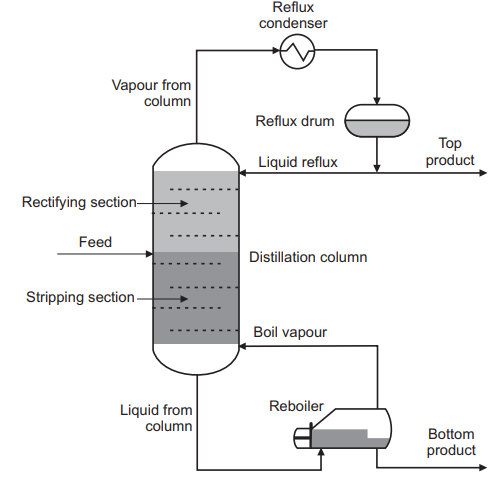 Historically, distillation has been used since 1200 BC in perfumery operations. Early forms of distillation were batch processes using one vaporization and one condensation. Purity was improved by further distillation of the condensate. Greater volumes were processed by simply repeating the distillation. Chemists were reported to carry out as many as 500 to 600 distillations in order to obtain a pure compound. In the early 19th century, the basics of modern techniques including pre-heating and reflux, were developed. In 1877 U.S. Patent was granted for a tray column for distillation of ammonia and in the subsequent years for oil and spirits. With the emergence of chemical engineering as a discipline at the end of the 19th century, scientific rather than empirical methods were applied. More accurate designs were used during the development of the petroleum industries. Today availability of powerful computers has allowed direct computer simulation of distillation columns.

Distillation is a process by which a liquid mixture is separated into fractions with higher concentrations of certain components by exploiting differences in relative volatility. Distillation has been used widely to separate volatile components from non-volatile compounds. In industrial settings such as oil refineries and natural gas processing plants, this separation process is undertaken using a distillation column.

Distillation is one of the most important processes for separating the components of a solution. The solution is heated to form a vapor of the more volatile components in the system, and the vapor is then cooled, condensed, and collected as drops of liquid, Shown in the Figure above. By repeating vaporization and condensation, individual components in the solution can be recovered in a pure state. Essences and many pure products from the oil refinery industry are processed via distillation.

The mechanism involved in distillation is the differences in volatility between individual components. With sufficient heat applied, vapors are formed from the liquid solution. The liquid product is subsequently condensed from the vapor phase by the removal of the heat. Therefore, heat is used as the separating agent during distillation. In general, distillation can be carried out either with or without reflux involved. For the case of single-stage differential distillation, the liquid mixture is heated to form a vapor that is in equilibrium with the residual liquid. The vapor is then condensed and removed from the system without any liquid allowed to return to the still pot. This vapor is richer in the more volatile component than the liquid removed as the bottom product at the end of the process. However, when products of much higher purity are desired, part of the condensate has to be brought into contact with the vapor on its way to the condenser and recycled to the still pot. This procedure can be repeated many times to increase the degree of separation in the original mixture. Such a process is normally called “rectification.”

Fractionation: It is another term for distillation also called fractional distillation.
Feed: The liquid and/or gas feed into the distillation column.
Feed tray: The tray below the inlet nozzle is called the feed tray.

Distillation takes advantage of the difference in relative volatility of the feed mixture components. Generally for two or more compounds at a given pressure and temperature, there will be a difference in the vapor and liquid compositions at equilibrium due to component partial pressure. Distillation exploits this by bringing liquid and gas phases into contact at temperatures and pressures that promote the desired separation. During this contact the components with the lower volatility (typically lower boiling point) preferentially moves into the liquid phase while more volatile components move into the vapor phase.

For the liquid across the tray:

For the vapor through the tray:

Where C is concentration and T is temperature.

When packing is used rather than trays the principle remains the same, in fact, packing is often referenced in terms of the height equivalent to a theoretical plate (HETP) i.e. what height of packing is equivalent to one theoretical plate. The packing is just an alternative method to bring the liquid and vapor phases into contact with the liquid generally flowing over the surfaces of the packing material, while the vapor passes up through the space between packing elements.

The distillation process can be improved by understanding the following operating parameters.

(i) Distillation is used for many commercial processes, such as the production of gasoline, distilled water, xylene, alcohol, paraffin, kerosene, and many other liquids.

(iv) Toxic and costly organic solvents are used in the extraction, synthesis, and analysis of drugs. This solvent can be recovered by distillation for economic as well as environmental protection benefits.

(v) Distillation is used in the separation of volatile oils such as clove oil, anise oil, cardamom oil, eucalyptus oil, etc. from the plant extracts.

(vi) It can be used in the separation of volatile components from a mixture of two or more volatile liquids.

(viii) It can be used to liquefy and separate gases from the air. For example, nitrogen, oxygen, and argon are distilled from the air.

(x) It can also be used in the fractionation of crude oil into gasoline and heating oil.