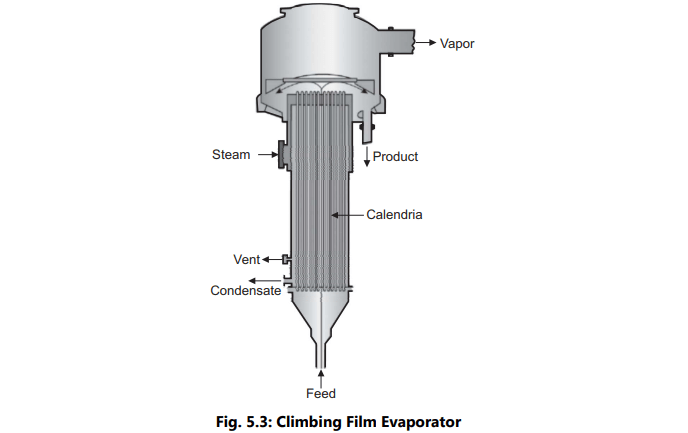 A climbing film vertical long tube evaporator is a type of evaporator that is essentially a shell and tube heat exchanger. Thus, it is also known as a rising film evaporator. This evaporator is superior to the falling film evaporator as the upstream film movement causes some particles to remain in the feed stream. The absence of any kind of distributor makes it suitable for such a variety of applications.

The theory of the climbing film evaporator is that the ascending force of the steam produced during the boiling causes liquid and vapours to flow upwards in parallel flow. At the same time, the production of vapour increases and the product is pressed as a thin film on the walls of the tubes, and the liquid rises upwards. This co-current upward movement against gravity has the beneficial effect of creating a high degree of turbulence in the liquid.

A Rising Film Evaporator (RFE) is a vertical shell and tube heat exchanger with a vapour liquid separator mounted at the top, shown in Figure. Tubes carrying the steam internally are placed vertically in the bottom of the cylindrical evaporator chamber. The length of the boiling tubes is typically not more than 23 ft (7m). This type of unit is known as the Roberts evaporator in Europe and is the calandria evaporator in the United States.

The liquid to be concentrated is delivered into the heated tube bundle at the bottom. Steam condenses on the outside of the tube from the shell side, heating the feed. This causes steam and vapour to form inside the tube, causing the liquid to boil. Natural convection is used to circulate the product. The resulting vapour pushes the liquid against the tube walls, creating an upward force that causes the feed to rise. As more vapours are generated, the tube’s centre velocity increases, forcing the remaining liquid against the tube wall, generating a thin layer that flows to the top above the calandria. The vapour lift generates high velocities, resulting in good thermal performance. This is useful when evaporating items that are excessively viscous or have a tendency to clog the heating surface. Usually there must be a high temperature difference between the heating and boiling sides of evaporator and is required to convey the liquid and to produce the rising film. The vapour and balance liquid are separated in the vapour-liquid separator.

(i) The main advantage of the rising film evaporator is the low residence time of the liquid feed in the evaporator compared to other evaporators.
(ii) It has relatively high heat transfer coefficient that reduces the overall heat transfer area requirement which in turn will lower the initial capital cost of the evaporator.
(iii) It is easier to clean the tubes.
(iv) Thermosiphon action eliminates the need for circulation pump.
(v) Trace quantities of suspended particles in the feed are tolerated.
(vi) Can operate under reasonable vacuum.
(vii) Multiple effect arrangement provides steam economy.
(viii) It is relatively inexpensive evaporator.

(i) It requires large floor space and is heavy.
(ii) It has poor heat transfer at low temperature differences.
(iii) Not suitable for thermolabile materials.
(iv) It evaporates products of low viscosity and have minimal fouling tendencies.