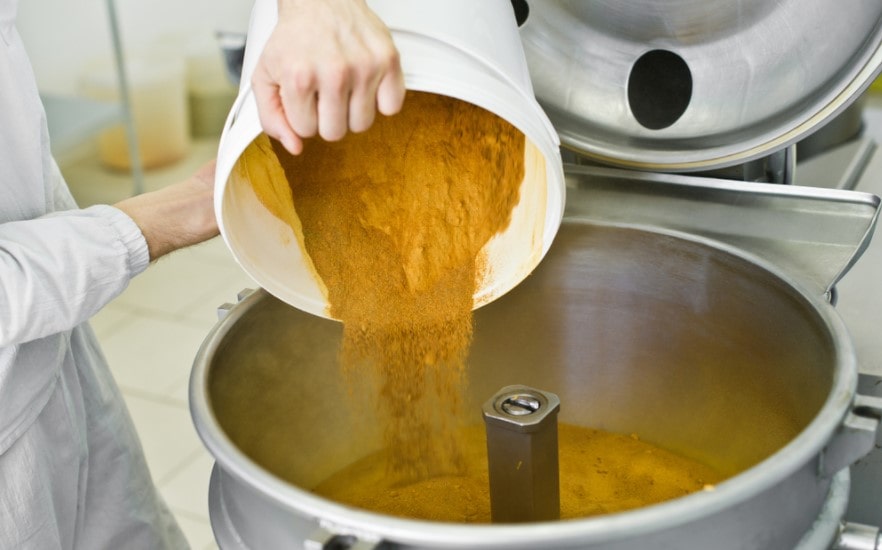 (i) Dry mixing: Mixing helps various powders to be mixed in varying proportions prior to granulation or tableting. Dry mixing of the materials makes them suitable for direct compression into tablets.
(ii) Product features: The mixing helps to deliver an accurate dosage that has an acceptable appearance and texture, or to maintain formulation stability for the appropriate length of time. The importance of proper mixer selection and its optimal operation can hardly be over-estimated.
(iii) Dry blending: Mixing is used for dry blending in the manufacture of many vitamins, dietary supplements, and drugs in powders (insufflations, face powders, and tooth powders), capsules, and tablets. Dry blending operation combines the active ingredient with other solid excipients in the most appropriate way. Sometimes relatively small amounts of liquid may be added to the solids in order to coat or absorb coloring and flavoring agents, oils, or other solutions.
(iv) Emulsions: Throughout the pharmaceutical industry, high shear mixing is widely used in the preparation of emulsions such as creams and medicated lotions.
(v) Heterogeneous mixtures: Mixing is used when different powders behave differently when added into liquid, and some require more coaxing in order to dissolve, hydrate or disperse completely than others. The ‘easier’ ones need only
gentle agitation but more challenging powders needs higher speed devices that generate a powerful vortex into which the powders are added for faster wet-out.

(vi) Tough agglomerates: It is used to deal with solids that tend to form tough agglomerates which do not easily break apart. A high shear mixer is often used to resolve such issues and many solutions and dispersions are made. For example,
tablet coatings, vaccines, and disinfectants.
(vii) Fluid blending: Mixing is used for continuous blending of fluid streams, emulsification, and dispersion of gases into liquid, pH control, dilution, and heat exchange. A static mixer is unique with no moving part that relies on external pumps to move the fluids through it. For example, dissolution of soluble solids in viscous liquids for dispensing in soft capsules and in the preparation of syrups.
(viii) Viscous fluids: Mixing is used for batch mixing of viscous formulations. Mixers are used in the pharmaceutical industry for batch manufacturing of moderate to relatively high viscosity applications such as syrups, suspensions, pastes, creams, ointments, and gels.
(ix) Uniformity in size distribution: Mixing helps in particle size distribution and other related parameters which depend on cycle time and mixer design. Thus the selection of proper mixer along with product chemistry, operating temperature, pressure/vacuum conditions, quality of raw materials, presence of additives, etc. help to obtain appropriate product features.