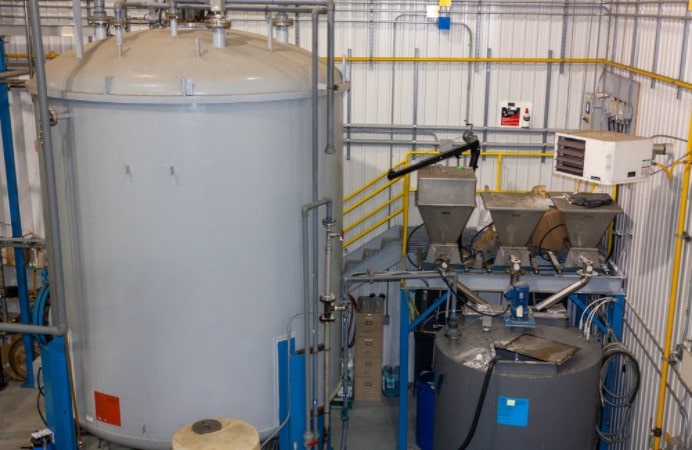 In pharmaceutical processing, mixing involves certain heterogeneous components to be manipulated with the intent to make them more homogeneous. The term “mixing” is defined as a process that results in the randomization of dissimilar particles within a system. Mixing is defined as an operation in which two or more components in a separate, roughly mixed condition are treated so that each particle lies as nearly as possible in contact with a particle of each of the other ingredients. This may be performed between any two phases, ranging from mobile liquids to viscous liquids, semi-solids, and solids. It is performed to allow heat and/or mass transfer to occur between one or more streams, components or phases. Even modern industrial processing involves chemical reactors as mixers. This can be between one component with different particle sizes.

The operation opposite to the mixing is ‘segregation’. The terms ‘mixing’ and ‘blending’ are often used synonymously, but technically they are a bit different. Blending is a process of combining materials but is a relatively gentle process compared to mixing. In terms of the phase of the material, blending is the process of solid-solid mixing or mixing of bulk solids with a small quantity of liquid, whereas mixing is more closely associated with liquid-liquid, gas-liquid, and viscous materials.

Mixing and blending are the most demanding unit operations in the pharmaceutical, chemical, and food processing industries. For example, chemical process industries involves mixing and blending of specialty chemicals, explosives, fertilizers, dry powdered detergents, glass or ceramics, and rubber compounds. The pharmaceutical industry employs the blending of active ingredients of a drug with excipients like starch, cellulose, or lactose whereas in the food industry, preparation of cake mix, spices, and flavors. In practice mixing is a critical process because the quality of the final product and its attributes are derived by the quality of the mix. Improper mixing results in a non-homogenous product that lacks consistency with respect to desired attributes like chemical composition, color, texture, flavor, reactivity, and particle size.

With the proper equipment selection it is possible to mix a solid, liquid or gas into another solid, liquid or gas. For example, a biofuel fermenter requires mixing of microbes, gases and liquid medium for optimal yield; organic nitration requires concentrated (liquid) nitric and sulfuric acids to be mixed with a hydrophobic organic phase whereas production of pharmaceutical tablets requires blending of solid powders. The wide variety and ever-increasing complexity of mixing processes encountered in industrial applications requires careful selection of design, and scale-up to ensure effective and efficient mixing. Improved mixing efficiency leads to shorter batch cycle times and operational costs. In order to increase productivity and survive in today’s competition, there is a need of selecting robust equipment capable of fast blend times, lower power consumption, equipment flexibility, ease of cleaning and other customized features. In addition to blending components, many modern mixers are designed to combine different process steps such as coating, granulation, heat transfer, and drying into single equipment, etc.

Agitation is the process of keeping a mixture that has been mixed in the proper mixed state required for the ‘end’ product. Mixing refers to the actual stirring of different liquids and/or materials to blend them together into an end product or mixture. Once this mixture is ‘mixed’ it may require agitation to keep the mixture in the proper ‘mixed’ state.

Generally, mixing can lead to three types of mixtures that are fundamentally different in their behaviors:
(i) Positive mixtures: Positive mixtures are formed when two or more components are irreversibly mixed together by a diffusion process. In this case, no energy input is required and the time allowed for the components to mix is sufficient.
In addition, these types of materials do not create any problems during their mixing process.
(ii) Negative Mixtures: Negative mixtures are formed when components are mixed to form a heterogeneous system, for example, an emulsion or suspension. The components of these mixtures have high tendency to separate out as they are not continuously stirred. Thus, such mixtures are more difficult to prepare as they need high degree of mixing with external force.
(iii) Neutral mixtures: Neutral mixtures are stable in behavior. The components of these mixtures do not have the tendency to mix spontaneously, but once mixed, they do not separate out easily. Pharmaceutical products such as pastes, ointments, and mixed powders are examples of neutral mixtures.