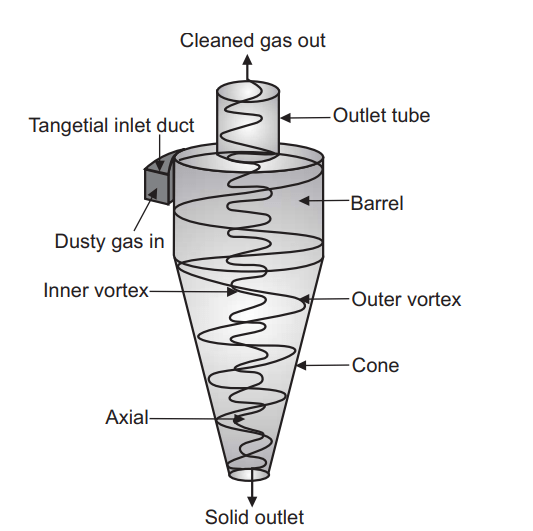 Cyclone separator are a low-cost, low-maintenance way of separating particulate matter from air or other gas streams. This separator is mainly used for the separation of solids from liquids. It mainly consists of a tangential inlet to feed the materials inside the chamber. It has solid and fluid outlets which separate fluid through one side and solids through the other side.

The air-carrying particulate matter is driven along the tangential axis of a cyclone. Within the chamber, a helical flow pattern is created. The particles migrate to the exterior of the chamber due to the centrifugal force. Gravity pulls them down to the bottom of the cyclone. While the gas phase reverses its axial direction of flow and exits through the vortex finder, the gathered particles are allowed to exit through an underflow pipe (gas outlet tube). The air rises to the top of the cyclone from the center.

Cyclone separators are a bit complicated in design with better particle removal efficiency. Cyclones are basically centrifugal separators. It consists of a cylindrical vessel referred to as the barrel with the conical base, Fig. 3.5. A tangential intake and a fluid outflow are located in the upper section of the vessel, while a solid exit is located at the bottom. Cyclones have no moving parts and are available in many shapes and sizes. For example, cyclone separators of 1 to 2 cm diameter are used for particle size analysis, and up to 5 m diameter is used after wet scrubbers, but the basic separation principle remains the same.

Typically, air is supplied tangentially at a very high velocity into solid-gas suspensions to cause rotating movement within the vessel. The fluid (gas) is drained from the top’s central outlet. The particles are acted on by centrifugal force due to the cyclone separator’s rotatory flow. Solids are hurled against the walls, generating an outer vortex, before falling to the conical base and being released through the solids outlet. The particles are separated from the air stream by a centrifugal force caused by the increased air velocity in the outer vortex. When air reaches the bottom of the cone, it starts to flow radially inwards and out at the top as clean air/gas, while particulates fall into the cyclone’s dust collection chamber.

(i) Cyclone separator requires low capital investment.
(ii) It has high efficiency for 5 – 200 µm particles.
(iii) It generates a high flow rate of volume
(iv) A lack of moving parts reduces wear and tear.
(v) It can be operated on a continuous or batch processes.
(vi) It requires virtually no downtime for maintenance or recovery.
(vii) It can be used in a variety of ways..
(viii) It is small in size relative to other separation equipment.
(ix) It can be operated at a wide range of temperatures and pressures.

(i) It shows reduced efficiency when overloaded than its capacity.
(ii) It has trouble getting good separation of compounds with similar densities.
(iii) It cannot handle viscous flow.
(iv) The extremely high velocities cause abrasive wear.
(v) Clogging of the dust outlet is common in reverse flow cyclones.

The most common application of a cyclone separator is to remove “heavys” from a liquid mixture that originates from a centrifugal pump or another continuous supply of pressured liquid. For procedures where the “lights” make up the majority of the mixture and the “heavies” settle rather easily, a cyclone separator is likely to be the best option. Solids and water can be separated using these.

(i) Cyclone separator is used to separate the suspensions of a solid in a gas or air. It can be used with the liquids suspensions of solids.
(ii) It is used in the production of active pharmaceutical ingredients (API) through drying systems such as spray or fluid bed drying.
(iii) It can also be used for the separation of particles based upon the size, specific gravity, porosity, and concentration from solids, liquids, and gases.
(iv) In the pharmaceutical industry it is mostly used for the separation of fines from coarse granules.
(v) In tablet compression cyclone is used to extract waste powder before it reaches the central extraction system.
(vi) It can be used in air-handling systems to produce particle-free clean air.
(vii) It is used in the oil industry to separate oil from water or vice versa.