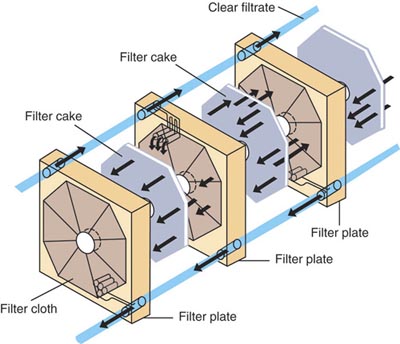 Plate and Frame Filter Press: the mechanism of this filter is surface filtration. The slurry enters the frame under pressure and flows through the filter medium. The filtrate is collected on the plates and sent to the outlet. Various frames and plates are used so that surface area increases and, consequently, large volumes of slurry can be processed simultaneously with or without washing.

The components of this filter are as follows.
(i) Frame: It maintains the slurry reservoir and has inlet (eye) for slurry.
(ii) Filter medium: It is for solid retention.
(iii) Plate: This equipment along with section-supports the filter medium, receives the filtrate and has outlet (eye).
(iv) Assembly of plate and frame filter press.

Plate and frame are usually made of aluminium alloy. Sometimes these are also coated for protection against corrosive chemicals and made suitable for steam sterilization. Frame contains an open space inside wherein the slurry reservoir is maintained for filtration and an inlet to receive the slurry. The plate has a studded or grooved surface to support the filter cloth and an outlet. The filter medium (usually cloth) is fitted between plate and frame. Frames of different thicknesses are available and frame with optimum thickness is chosen. Selection is mainly based upon the thickness of the cake formed during filtration. Plate, filter medium, frame, filter medium and plate are arranged in the sequence as shown in Figure above, and clamped in a supporting structure. A number of plates and frames are used to have a large surface area. These filtration units are operated in parallel. Channels for the slurry inlet and filtrate outlet can be arranged by fitting inlet to the plates and frames, these join together to form a channel. In some types, only one inlet channel is formed, while each plate is having individual outlets controlled by valves.

The working of the frame and plate process can be described in two steps, namely filtration and washing of the cake (if desirable). The working of a plate and frame press is shown in Figure below. Slurry enters the frame from the feed channel and passes through the filter medium on to the surface of the plate. The solids form a filter cake and remain in the frame. The thickness of the cake is usually half the frame thickness as filtration occurs on each side of the frame. Thus, two filter cakes are formed, which meet eventually in the centre of the frame. The optimum thickness of filter cake for any slurry depends on the solid content in the slurry and the resistance of the filter cake. The filtrate drains between the projections on the surface of the plate and escapes from the outlet. With the time resistance of the cake increases and the filtration rate decreases. It is advisable to stop the process at a certain point rather than continuing at very low flow rates. On completion of filtration the press is emptied and the cycle is restarted.

Generally washing of the filter cake is necessary and for that the ordinary plate and frame press is not suitable. The cake built-up at the centre in the frame brings flow to a standstill. Thus, water washing of cake using the same channels used for the filtrate is inefficient. A modification of the plate and frame press is another option. In modified form an additional channel is included for washing, Figure below (d). In half the wash plate there is a connection from the wash water channel to the surface of the plate.

Finally washed water escapes through the outlet of that plate.

Thus, provision of special washing plates makes it possible for the wash-water to flow over the entire surface of washing plate that makes the uniform resistance of cake to the flow and the entire cake is washed efficiently. The water wash is efficient only when the frames are full with filter cake. If the cake does not fill the frame completely the wash water causes the cake to break on the washing plate side of the frame and the washing will be less effective. It is essential to allow the frames become completely filled with the cake. This helps in emptying the frames as well as in washing the cake correctly.

A provision of glass tube (sight glass) to observe contamination can be made at the outlet on each plate. This permits the inspection of quality of the filtrate. The filtrate goes through the control valve to an outlet channel. The filtration process from each plate can be seen. In the case of a broken cloth, the faulty plate can be isolated and filtration can be continued with one plate less. A provision of filter sheets composed of asbestos and cellulose capable of retaining bacteria can be used for sterile filtration with whole filter press and filter medium previously sterilized. Usually steam is passed through the assembled unit for sterilization. The examples include collection of precipitated antitoxin, removal of precipitated proteins from insulin liquors and removal of cell broth from the fermentation medium. Heating/cooling coils can be incorporated in the press for the filtration of viscous liquids.

(i) Simple in operation, convenient in maintenance, and safe in operation with multiple safety devices. Variety of materials such as cast iron (for handling common substances), bronze (for smaller units), stainless steel (to avoid contamination), hard rubber or plastics (to avoid metal) and wood (for lightness) can be used.
(ii) It provides a large filtering area in a relatively small floor space.
(iii) It is versatile equipment whose capacity can be varied according to the thickness and the number of frames used. Surface area can be increased by employing chambers up to 60.
(iv) This press has sturdy construction that makes use of pressure difference of 2000 kilopascals to be used.
(v) Cake washing is very efficient.
(vi) Operation and maintenance is low as it has no moving parts and the filter cloths can be easily renewable.
(vii) The presence of all external joints makes plate to be isolated in case of if any leaks and the contamination of the filtrate can be avoided.
(viii) It produces dry cake in the form of slab.

(i) It is a batch filter so there is a good deal of ‘down-time’, which is non-productive.

(ii) The filter press is an expensive. The emptying time, the labour involved and the wear and tear of the cloth results in high cost process.

(iii) The operation is critical as the frames should be full otherwise inefficient washing results in difficulty to remove cake.