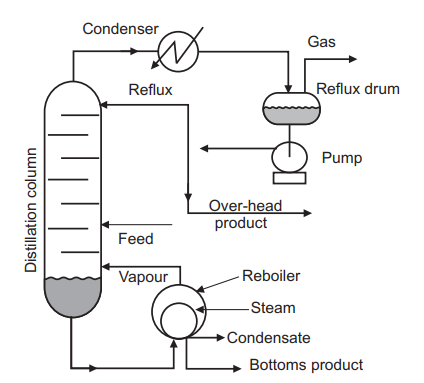 What is molecular distillation?

Molecular distillation is a type of short-path vacuum distillation, characterized by extremely low vacuum pressure (≈ 0.01 torr). It is a process of separation, purification, and concentration of natural products, complex and thermally sensitive molecules.

This process is characterized by short-term exposure of the distillate liquid to high temperatures in a high vacuum in the distillation column and a small distance between the evaporator and the condenser of around 2 cm. In molecular distillation, fluids are in the free molecular flow regime. The mean free path of molecules is comparable to the size of the equipment. The gaseous phase no longer exerts significant pressure on the substance to be evaporated, and consequently, the rate of evaporation no longer depends on pressure. The motion of molecules is in the line of sight because they do not form a continuous gas anymore. Thus, a short path between the hot surface and the cold surface is necessary.

Molecular distillation is considered the safest mode of separation and to purify the thermally unstable molecules and related compounds with low volatility and elevated boiling points. The process distinguishes the short residence time in the zone of the molecular evaporator exposed to heat and low operating temperature due to vacuum in the space of distillation. The separation principle of molecular distillation is based on the difference of molecular mean free path. The passage of a free path for molecules should be collision-free.

Langmuir and Knudsen derived an equation that describes the yield of distillate for molecular distillation.

Where,
Q is the evaporated quantity kg/h,
P = pressure (mbar),
F = evaporator surface (m2), k = 1577,
M = molecular weight g/mole and
T is the absolute temperature (K).
Theoretically, molecular distillation could be used for separating mixtures that have close boiling point or forming azeotrope.
According to the principle of thermodynamics under certain temperatures and pressure conditions the molecular mean free path (L) is expressed as;

Where,
D is the effective molecular diameter;
P is molecular space in which the pressure;
T is the molecular environment temperature;
K is the Boltzmann constant.

A simple molecular distillation has a unit that is placed on a hot surface. The distillate moves a very short distance before it gets condensed, shown in the figure below. If the substance is not too viscous, it will drip from the point on the glass condensing surface and run down to the receiving point. The sophisticated apparatus with a different design will have the liquid distilled down on a heated surface close to the condenser. The movement of a film prevents a build-up of non-volatile materials on the surface of the material to be distilled as this might cause the distillation to stop.

This is a technique of purification applied under molecular distillation utilized worldwide for food processing, pharmaceutical applications, petroleum industries, and chemical industries. The main principle behind the unit is low pressure and very short residence time. Degassing of feed material leads to the next stage where the material is flown into a spinning disc which is pre-heated. The entire process of distillation gets over in less than a fraction of a second because the material that is feed into expands on the spinning pre-heated disc. The distillate finally condenses on the outer extremes of the shell and then slowly flow into the collecting vessel due to gravity. The residual matter is collected in the gutter around the spinning disc and finally into the collecting vessel below, Shown in the Figure below. The molecular distillation process occurs at a very low temperature and hence can avoid thermal decomposition. The high vacuum applied helps in eliminating the oxidation due to exposure to atmospheric air. The free path distillation is carried out at a very low pressure of 10-2 Torr while in molecular distillation the pressure is kept at 10-3 Torr.

The molecular distillation process is carried out at very low pressure so that the distance between the hot and condensing surfaces is less than the mean free path of the molecules. Each of the unit is a single-stage but has several units in series. Molecular distillation is applied to thermally sensitive, high molecular weight materials. The contact times in commercial units may be as low as 0.001 seconds. The film thickness is of the order of 0.05 – 0.1 mm. In vacuum operations, air ingress is very much possible, whereas in pressure operations, vapor emissions are likely to occur. The distillation process is inherently hazardous with flammables and the presence of huge volume of flammables in reboilers, in column internals and adjacent piping pose huge explosion hazards in these distillation units. The concentration gradient between the top and bottom of the column has a bearing on safety. The concentration of impurities in the column can lead to hazards.

(i) Toxicity: Avoids the problem of toxicity of solvents used as the separating agent.
(ii) Thermal stability: Minimizes losses due to thermal decomposition.
(iii) Continuous process: It can be used in a continuous feed process to harvest distillate without having to break the vacuum.
(iv) Stability: The vacuum allows oils to be processed at minimal temperatures, reducing the risk of oxidative damage.
(v) Purity: Separating the oil’s components by weight allows contaminants to be reduced far below industry standards.
(vi) Concentration: Weight grouping allows the processor to concentrate fatty acids.
(vii) Short residence time: This process has a short residence time of the feed liquid.
(viii) It works at a significantly lowered temperature due to high vacuum capability
(ix) It has optimal efficiency in mass and heat transfer.
(x) It is suitable for processing high-value products.

(i) Cost: The cost for this complicated technology is relatively high.
(ii) Natural form: The starting natural triglyceride form is lost in the distillation process.