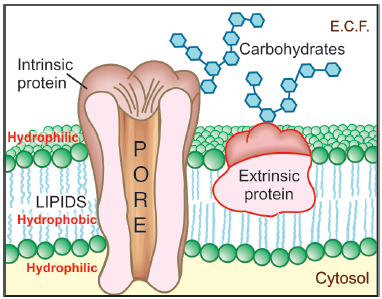 Membrane transport is essential for cellular life. As cells proceed through their life cycle, a vast amount of exchange is necessary to maintain function. Transport may involve the incorporation of biological molecules and the discharge of waste products that are necessary for normal function.

All pharmacokinetic processes involve the transport of the drug across biological membranes.

Drugs are transported across the membranes by: (a) Passive diffusion and filtration (b) Specialized transport

The medication diffuses through the membrane in the direction of its concentration gradient, with the membrane acting as a passive facilitator. For the vast majority of medicines, this is the most significant mechanism; pharmaceuticals are alien molecules (xenobiotics), and the body develops specialised mechanisms largely for natural metabolites.

Most drugs are weak electrolytes, i.e. their ionization is pH dependent (contrast strong electrolytes that are nearly completely ionized at acidic as well as alkaline pH). The ionization of a weak acid HA is given by the equation:

Strongly basic drugs, e.g. atropine sulfate, ephedrine HCl, chloroquine phosphate, etc. conversely ionize more at acidic pH. Ions being lipid insoluble, do not diffuse and a pH difference across a membrane can cause differential distribution of weakly acidic and weakly basic drug anions on the two sides. This is because they form salts with anions, which form salts that are insoluble in fatty acids.

Implications of this consideration are:

A) Drugs, e.g. aspirin (pKa 3.5) are largely unionized at acid gastric pH and are absorbed from stomach, while bases, atropine (pka 10) are ionized and are taken only when they reach the intestines.

B) The unionized form of acidic drugs which crosses the surface membrane of gastric mucosal cell, reverts to the ionized form within the cell and then only slowly passes to the extracellular fluid. This is called ion trapping, i.e. a weak electrolyte crossing a membrane to encounter a pH from which it is not able to escape easily.

D) Drugs excreted faster if urine is acidified than if it is alkaline, so they do not back diffuse in the kidney tubules and are then released faster.

Filtration is passage of drugs through aqueous pores in the membrane or through paracellular spaces. This can be accelerated if hydrodynamic flow of the solvent is occurring under hydrostatic or osmotic pressure gradient, e.g. across most capillaries including glomeruli. Lipid-insoluble drugs cross biological membranes by filtration if their molecular size is smaller than the diameter of the pores. Most cells have very small pores (4 Å) and drugs with MW > 100 or 200 are not able to penetrate.

This can be carrier mediated or by pinocytosis.

All cell membranes express a host of transmembrane proteins which serve as carriers or transporters for physiologically important ions, nutrients, metabolites, transmitters, etc. across the membrane. At some sites, certain transporter translators also translocate xenobiotics, including drugs and their metabolites. Transporter transport is specific for the substrate (or the type of substrate, e.g. an organic anion), competitively inhibited by analogues which utilize the same transporter, and slower than the flux through channels.

Depending on requirement of energy, carrier transport

rt is of two types:

The transporter, belonging to the super-family of solute carrier (SLC) transporters, operates passively without needing energy and translocates the substrate in the direction of its electrochemical gradient, i.e. from higher to lower concentration.

It requires energy, is inhibited by metabolic poisons, and transports the solute against its electrochemical gradient (low to high), resulting in selective accumulation of the substance on one side of the membrane.

Primary active transport Energy is obtained directly by the hydrolysis of ATP. The transporters belong to the superfamily of ATP binding cassettee (ABC) transporters whose intracellular loops have ATPase activity.