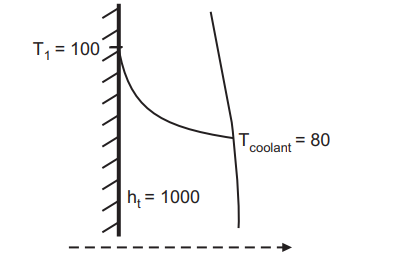 Heat transfer mechanisms are simply ways by which thermal energy is transferred between objects. It is based on the basic principle that kinetic energy tries to be at equilibrium or at equal energy states. There are three different ways for heat transfer to occur, namely conduction, convection, and radiant heat. One more related phenomenon that transfers latent heat is called evapotranspiration.

The term “convection heat transfer” refers to energy transfer that occurs as a result of bulk fluid motion. The fluid motion along the surface causes this form of heat transfer through gases and liquids from a solid boundary. The heat transfer/area (Q/A) is proportional to the fluid-solid temperature difference (Ts – Tf), according to Newton. A small layer of fluid close to the solid surface is usually where the temperature difference occurs. A boundary layer is a thin fluid layer that separates two fluid layers. The heat transfer coefficient is the proportionality constant (h).

The movement of hot fluid causes thermal energy to travel in convection. Normally, this motion is caused by changes in density. Warmer particles are less dense, thus those with a higher temperature will travel to cooler locations, while those with a lower temperature would move to areas with a higher temperature. As a result, the fluid will continue to move until it reaches equilibrium. The heat transfer coefficient is affected by the fluid type and velocity. The heat flux is either local or region averaged, depending on the area of interest. The several types of convective heat transmission are often divided into the following categories:

For a cylinder block, Fig. 4.2, with forced convection (h) of 1000, the surface temperature of 100 °C, and a coolant temperature of 80 °C, the local heat transfer rate is calculated as:

Radiation heat transfer occurs when electromagnetic waves or photons are emitted from a surface or volume, as seen in Fig. 4.3. Electromagnetic radiation is emitted by all moving charged particles. This wave will travel until it collides with another particle. This radiation will be received as kinetic energy by the particle that receives it. Even when everything is at the same temperature, particles will receive and emit radiation, but this will go unnoticed because the material is at equilibrium. Radiation does not necessitate the use of a heat transmission medium and can occur in the absence of one.

For moderate (less than 100 °C) temperature differences, it should be noted that the radiation and natural convection heat transfer are about the same.