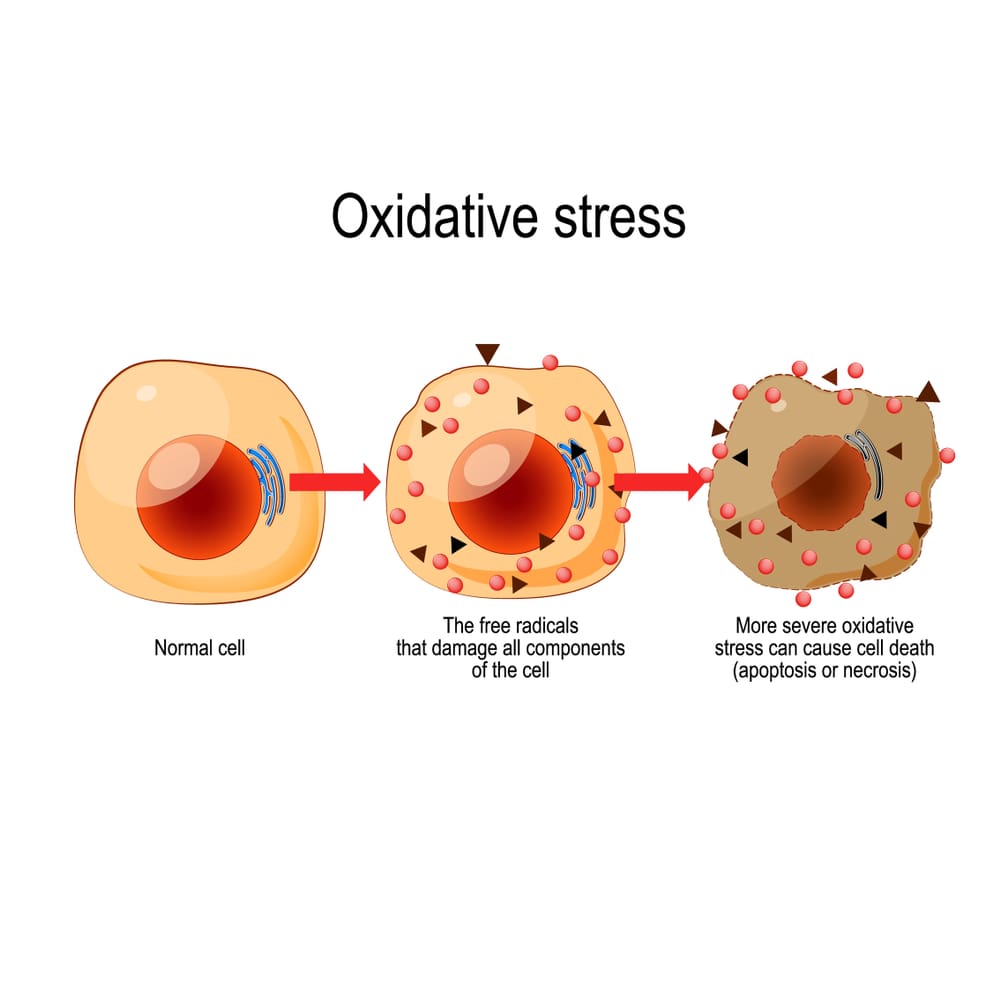 Free Radical Induced Injury : Most agents acting in this way cause cell damage by affecting directly cell membranes and triggering a lethal sequence of events. Free radicals are chemical species that have a single unpaired electron in outer orbit, they initiate an autocatalytic reaction which mainly occurs in reperfusion of the ischemic cell. Activated oxygen radicals are now known to be the common mechanism to cells in injury in many conditions, i.e. aging, chemical and radiation injury, bacterial infections, inflammation, tumor necrosis, etc. Free radicals like superoxide radicals, hydroxyl ions, and peroxide ions are very destructive to cells which cause lipid peroxidation, oxidation of protein, DNA damage, cytoskeleton damage, etc. They are initiated within cells by enzymatic reactions and non-enzymatic systems. The system has a series of protective mechanisms to protect the cells from these free radicals, like antioxidant enzymes such as catalase, glutathione peroxidase, and superoxide dismutase. Vitamin E and selenium also help for protection from free radical-induced cellular damage.

The deficiency of all these protective mechanisms may lead to free radical reactive cellular damage, especially in muscle.

Exposure of Ionizing Radiation causes the generation of a variety of free radical species. This occurs following the radiation-induced splitting of molecules which often generates free radical products. Enzymatic metabolism of chemicals or drugs. For e.g, carbon tetrachloride can generate [CCl3]* which causes autooxidation of the polyenic fatty acid present within membrane phospholipids.

The regulated transfer of free radicals is the basis of the Electron Transport Chain that powers Cellular Respiration. Although the free radicals generated during electron transport are tightly controlled, a small amount can escape and cause damage. Escape of free radicals is substantially enhanced when mitochondria are injured which occurs frequently following metabolic cell injury.

Metabolism of several exogenous chemicals can result in the generation of free radicals. Some metals which accept or donate electrons (e– ). For e.g. Cu and Fe (Fenton reaction). Nitric oxide (NO) can act as a free radical and converted it into a highly reactive peroxynitrate anion (ONOO– ) as well as NO2* and NO– 3. Normally, NO can be produced by endothelial, neurons, macrophages, etc.

The redox reactions occur during normal metabolism. For e.g, in respiration, molecular oxygen is reduced to water by accepting 4 electrons. During this process, a small number of toxic intermediates are formed. The free radical reaction can be studied as follows:

Free radical causes cleavage by oxidation of protein macromolecules of cells causing cross-linkage in the amino acid sequences of protein and fragmentation of polypeptides.

Free radical breaks DNA fragments into a single strand, so there will be the formation of DNA that is defective. Replication of this DNA is not possible and thereby cell death may occur.