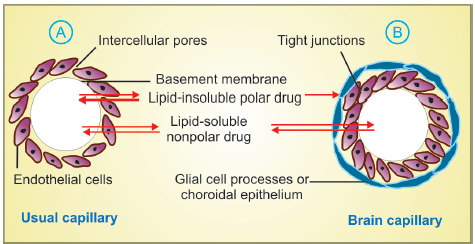 Drug distribution: Once a drug has gained access to the bloodstream, it gets distributed to other tissues that initially had no drug, concentration gradient being in the direction of plasma to tissues.

The extent and pattern of a drug’s distribution are determined by its:

Presuming that the body acts as a single homogeneous compartment with volume V into which the medication is instantly and uniformly dispersed, the apparent volume of distribution (V) is calculated.

In this example, 1000 mg of drug injected i.v. produces steady-state plasma concentration of 50 mg/L, apparent the volume of distribution is 20 L

In the above example, the drug does not actually distribute into 20 L of body water, with the exclusion of the rest of it. This is only an apparent volume of distribution which can be defined as “the volume that would accommodate all the drug in the body if the concentration throughout was the same as in plasma”. The amount of drug present in the body as a multiple of that contained in a unit volume of plasma is a very useful pharmacokinetic concept.

Drugs bound to plasma proteins are largely restricted to the vascular compartment and have low values, e.g. diclofenac and warfarin (99% bound) V = 0.15 L/kg. Drug distribution is not only a matter of dilution but also binding and sequestration.

A high V value suggests that there is a greater amount of drug in extravascular tissue. Because most of the drug is contained in other tissues and plasma concentration is low, drugs sequestered in other tissues may have V considerably higher than total body water or even body mass, e.g. digoxin 6 L/kg, propranolol 4 L/kg, morphine 3.5 L/kg. As a result, in the event of poisoning, medications with large distribution volumes are difficult to remove by hemodialysis.

Highly lipid-soluble medicines are first delivered to organs with high blood flow, such as the brain, heart, and kidney. Later, the medication is taken up by less vascular but bulkier tissues (muscle, fat)—plasma concentration declines, and the drug is removed from the highly perfused locations. If the drug’s site of action was in one of the highly perfused organs, redistribution causes the drug’s activity to stop. The greater the drug’s lipid solubility, the faster it gets redistributed.

Anaesthetic action of thiopentone sod. injected i.v. is terminated in few minutes due to redistribution.

Penetration into brain and CSF

The capillary endothelial cells in brain have tight junctions and lack large paracellular spaces. Further, an investment of neural tissue covers the capillaries. Together they constitute the so called blood-brain barrier (BBB).The choroid plexus has a comparable blood-CSF barrier: capillaries are bordered by choroidal epithelium with tight connections. Both of these barriers are lipoidal, preventing nonlipidsoluble medicines like streptomycin and neostigmine from entering.

Only lipid-soluble medicines can consequently enter the central nervous system and have an effect. Furthermore, efflux transporters found in the brain and choroidal arteries, such as P-gp and anion transporter (OATP), expel many medicines that reach the brain through other routes, enhancing the protective barrier against potentially hazardous xenobiotics. Dopamine does not reach the brain, but its precursor levodopa does, therefore it is used to treat Parkinson’s disease. The permeability of these barriers is increased when the meninges or brain are inflamed. It has been suggested that certain medicines accumulate in the brain via using natural chemical transporters.

There is also an enzymatic BBB: Monoamine oxidase (MAO), cholinesterase and some other enzymes are present in the capillary walls or in the cells lining them. They do not allow catecholamines, 5-HT, acetylcholine, etc. to enter brain in the active form.

Lipoidal placental membranes allow lipophilic medicines to flow freely while limiting hydrophilic drugs. The placental efflux P-gp, as well as other transporters like BCRP and MRP3, help to keep foetal exposure to medicines provided by the mother to a minimum. The placenta is also a location for drug processing, which may reduce or change the foetal’s exposure to the medication. Nonlipid-soluble medicines, on the other hand, acquire access to the foetus when they are present in large concentrations or for lengthy periods of time in maternal circulation.

Some influx transporters also operate at the placenta. Thus, it is an incomplete barrier and almost any drug taken by the mother can affect the foetus or the newborn (drug taken just before delivery, e.g. morphine).

Most drugs possess physicochemical affinity for plasma proteins and are reversibly bound to them. Acidic drugs generally bind to plasma albumin and basic drugs to 1 acid glycoprotein. Binding to albumin is quantitatively more important. The extent of binding depends on the individual compound; no generalization for a pharmacological or chemical class can be made (even small chemical changes can markedly alter protein binding). For example, the binding percentage of some benzodiazepines is:

Increased drug concentrations can saturate the binding sites, resulting in decreased fractional binding when large quantities of the medication are administered. The typical therapeutic plasma aconcentration of a medication is given as a percentage binding. The following are the clinical consequences of plasma protein binding: