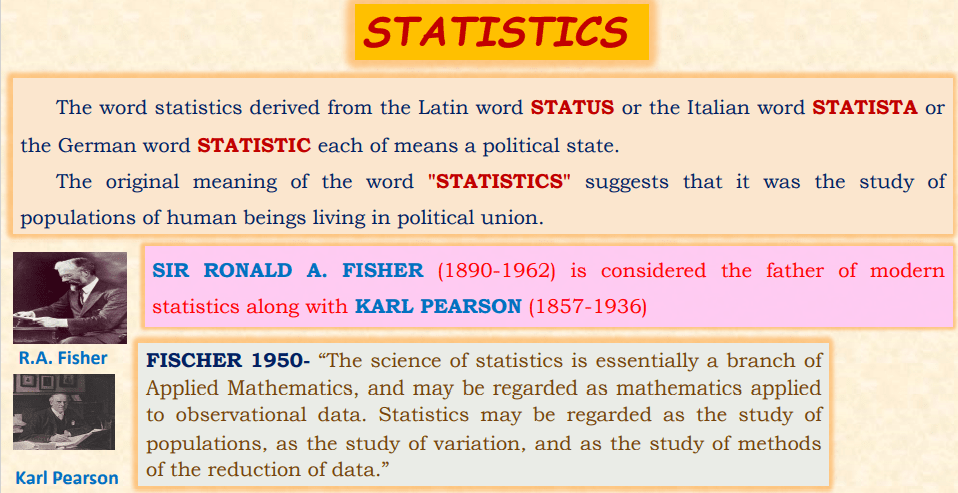 Statistics is defined as the science of Collecting, Organizing, Summarizing, Presenting, Analyzing, and Interpreting the data as well as deriving valid conclusions and making reasonable decisions on the basis of this analysis.

The word statistics is derived from the Latin word STATUS or the Italian word STATISTA or the German word STATISTIC of means a political state.
The original meaning of the word “STATISTICS” suggests that it was the study of populations of human beings living in political unions.

SIR ARTHUR LYON BOWLEY, defined statistics as “Numerical statements of facts in any department of inquiry placed in relation to each other”.

CROXTON and COWDEN defined statistics as the science of collection, presentation, analysis, and interpretation of numerical data from logical analysis.

KENDALL AND STUART defined this is the branch of the
scientific method which deals with the data obtained by counting or measuring the properties of populations of natural phenomena.”

KRUSKAL and WALLIS defined this as concerned with the inferential process, in particular with the planning and analysis of experiments or surveys, with the nature of observational errors and sources of variability that obscure underlying patterns, and with the efficient summarizing of sets of data.”