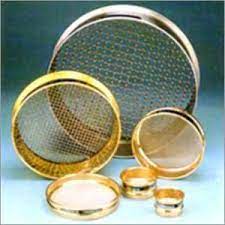 What is a sieve?

A sieves, sometimes known as a sifter, is a device used to separate desired materials from unwanted material or to determine a sample’s particle size distribution. This is a device that typically consists of a woven sieve, such as a mesh, net, or metal. The term “sift” comes from the word “sieve.” The holes in a sieve are incredibly small. Sieving is a relatively low-cost, simple-to-understand, and simple-to-use process. Grinding coarse particles against one another and filter holes separates or breaks them up.

The most typical equipment for particle size analysis is a sieve. Sieves with various types of holes are employed depending on the types of particles to be separated. Sieving plays an essential function in the pharmaceutical and food sectors, where it is utilized to prevent foreign bodies from contaminating the product. The industrial sieve’s design is quite important. Each sieve has a unique number that represents the number of meshes in a 2.54 cm (1 inch) length.

Based upon application specially constructed sieves are used. Various types of sieves includes electroformed sieves, perforated plate sieves, sonic sifters, air jet sieves, wet wash sieves etc. Generally pharmaceutical sieves are made up of stainless steel, brass, bronze etc. and are not coated with any material to avoid wear and tear as well as contamination in the products. Sieves should be non-reactive and resistant to corrosion. The most common choice of material for sieves is iron because it is cheap. Iron has limitation for its use when there is possibility of corrosion and contamination. This can be avoided by coating iron surfaces with galvanizing agent. Stainless steel, brass and phosphorus bronze due to their corrosion resistant, good strength and non-contaminating qualities are preferred as an alternative to iron. Even non-metals such as nylon and terylene are used if contamination is to be avoided. Sieves with different type of holes viz. size and shapes made in plates as perforations can be used as separating devices. Sieves made-up of woven cloth are used if fine powders are to be separated. This cloth can be made of cotton, nylon or silk.

Pharmaceutical sieves are extensively used for size separations from 300 mm down to around 38 µm. The efficiency of sieving decreases rapidly with fineness. Dry sieving is used for material above 5 mm in size and wet sieving is common in use down to 250 µm but is possible to about 40 µm. In its simplest form, a sieve is a surface having many apertures (holes), usually with uniform dimensions. Particles presented to that surface will either pass through or be retained, according to whether the particles are smaller or larger than the dimension of the apertures. There are numerous different types of industrial sieves available, Fig. 3.1. Some of the most common are vibrating sieves, static sieves, trommels, roller sieves, flip-flow sieves, circular sieves, linear sieves etc.

Vibrating motion is usually generated by eccentric rotating masses with an amplitude of 1.5–5 mm and a rotational speed of 700–1000 rpm. The correct type of vibration also stratifies the feed material, allowing finer particles to pass through the layer of particles to the sieve surface while bigger particles ascend to the top. Most types of vibrating sieves can be made with many sieve decks. The feed is fed to the top coarse sieve in multiple-deck systems, with the undersize falling through to the lower sieve decks, resulting in a range of sized fractions from a single sieve.

This vibrating sieve is commonly used for sizing purposes. The rotation of unbalanced weights or flywheels, usually linked to a single driving shaft, causes a vertical circular or elliptical vibration. Weight parts bolted to the flywheels can be added or removed to change the amplitude of the throw. The rotation can be done in either a counter-flow or an in-flow direction. Contra flow slows material flow and allows for more efficient separation, whereas in-flow allows for higher throughput. To allow material to flow over the sieve, single-shaft sieves must be set on a slope, usually between 15° and 28°.

An inclined sieve known as a grizzly sieve is used to filter very gritty material. Parallel steel bars or rails positioned at a preset distance apart and installed in line with the movement of ore define grizzlies. With a feed top size of 1 m, the spacing between grizzly bars is normally larger than 50 mm and can be as large as 300 mm. Grizzlies are most commonly used in mineral processing to size the feed to primary and secondary crushers.

These sieves are becoming increasingly popular in high-tonnage size applications where efficiency and capacity are critical. Banana sieves have a variable slope of roughly 40–30° at the feed end, decreasing to around 0–15° at the discharge end in 3.5–5° increments. At the feed end of the sieve, the feed material flows quickly due to the steep parts of the sieve. The resulting thin bed of particles stratifies more quickly, allowing for a faster sieving rate for very fine material than a slower moving thick bed. Toward the discharge end of the sieve, the slope decreases to slow down the remaining material, enabling more efficient sieving of the near-size material. The capacity of banana sieves is significantly greater and is reported to be up to three or four times that of conventional vibrating sieves.

These sieve are low-cost washing devices that are used to improve a variety of primary crushed hard rock and ore, including iron ore, as part of a material handling system. A rotating scrubber is a cylindrical drum with internal lifters that is supported on both ends by trunnion rollers. These machines are designed to remove water-soluble clays, toxic compounds, and coatings from a wide range of hard rock and ore. Solid shell and combination scrubber sieves are two types of rotary scrubbers that come in a variety of diameters and lengths. Drive transmission choices include chain and sprocket, gear and pinion, or pedestal mount hydraulic motor.

Test sieves are measurement instruments that use wire mesh with variable apertures to separate particles of different sizes to detect the size and size distribution of particles in a material sample. Brass, stainless steel, and brass frames with stainless steel mesh are some of the materials used in test sieves. 3″, 8″, and 12″ diameters are available, with mesh sizes ranging from 4 mm to 38 microns. The top test sieve has the greatest mesh size and the bottom test sieve has the smallest mesh size when layered on a sieve shaker. The pan is at the bottom of the sieve stack, and the covers are at the top.

Sieves used for sieving are to be cleaned regularly. The frequent use can cause changes in mesh openings but much of the damage sustained to working sieves occurs during cleaning. Often, the operator hurries to clear the mesh of residual particles by strongly tapping the frame. This tapping can distort the mesh. Operators also use brushes to remove residual particles after use. This process often distorts sections of the sieve mesh. These alterations of the sieve may change the quality of products in terms of size hence sieves are calibrated intermittently.

Sieving is the process of separating fine and coarse materials using a mesh or perforated surface. The technique has been used to size grains since ancient Egypt. These early sieves were made of reeds and grasses woven together. Today, the sieve test is the most common method for determining particle size distribution. Although the sieve process appears simple at first glance, it is a science and an art in practise to produce accurate and repeatable results. There are various areas of sieve specifications that need be discussed to better understand sieving, and some of them are listed in Table 3.3.