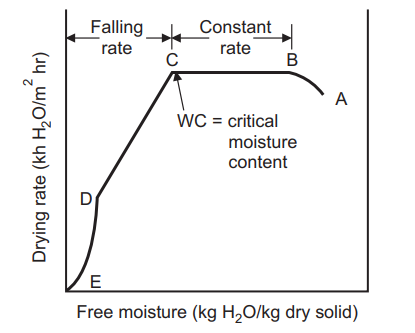 The drying rate curves are not smooth and continuous which indicates that the drying process involves a single mechanism throughout. In drying calculations, the water content in the wet solid is usually expressed on a dry weight basis, i.e. Kg of water/Kg of dry solid.

For each and every product, there is a representative curve that describes the drying characteristics for that product at a specific temperature, velocity, and pressure conditions. This curve is referred to as the drying curve for a specific product. Variations in the curve will occur principally in rate relative to carrier velocity and temperature. The curve is extremely valuable in understanding unusual behavior associated with the drying of each unique product. The drying process can be divided into three periods:
(a) Constant drying rate period.
(b) First falling drying rate period.
(c) Second falling rate period.

In a constant period, material or mass of material contain much of water that liquid surface exists which dries in a similar fashion to an open-faced body of water. Diffusion of moisture from within the droplet maintains saturated surface conditions and as long as this lasts, evaporation takes place at constant rate. When a solid is dried under constant drying conditions, the moisture content (MC) typically falls. The graph is linear at first, then curves and eventually levels off. Constant rate drying period (B-C) will proceed until free moisture appears from the surface, the moisture removal rate will then become progressively less. At CMC the drying rate ceases and remains constant. During the constant rate period, the moisture from the interior migrates to the surface by various means and is vaporized.

As the moisture content is lowered, the rate of migration to the surface is also lowered. If drying occurs at too high temperatures, the surface forms closely packed shrunken cells which are sealed together. This acts as a barrier to moisture migration and tends to keep the moisture sealed within. This condition is known as ‘case hardening’. The constant rate period is characterized by a drying independent of moisture content. During this period, the solid is so wet that a continuous film of water remains over the entire drying surface, and this water acts to lower the drying rate. The temperature of the wetted surface attains the wet-bulb temperature.

Web Bulb Temperature (WBT): WBT is the steady-state temperature shown by the thermometer whose bulb is covered with a wet wick and from which water is evaporating into a high-velocity air stream. The quantity of water evaporated is not high enough to alter the temperature and humidity of the air stream. The air is blown at high velocity (minimum 300 m/min) to cause evaporation of water from the wick. Evaporation requires latent heat. This heat comes from the surface of the glass bulb of the thermometer. So the temperature of the glass bulb decreases. The heat comes from the temperature difference between Tw and Ta (large). It is the case of simultaneous heat and mass transfer. This heat is latent heat for the phase change of water to water vapor.

The method used to estimate drying rates and drying times in the falling rate period depends on whether the solid is porous or non-porous. In a non-porous material, once there is no superficial moisture, further, drying can occur only at a rate governed by diffusion of bulk moisture to the surface. In a porous material, other mechanism appears, and drying takes place in the bulk of the solid instead of at the surface.

Period C to D represents conditions when the drying rate is largely independent of conditions outside the solid. The moisture transfer may be due to any combination of liquid diffusion, capillary movement, and vapor diffusion.

A factor that often greatly affects the drying rate is the shrinkage of the solid as moisture is removed. Rigid solids do not shrink appreciably, but colloidal and fibrous materials do undergo shrinkage. The most serious effect is the development of a hard layer on the surface that is impervious to the flow of liquid or vapor moisture and slows down the drying rate. In many materials, if drying occurs at too high a temperature, a layer of closely packed, shrunken cells, which are sealed together, forms at the surface that presents a barrier to moisture migration. Another effect of shrinkage is to cause the materials to warp and change their structure. Sometimes, to decrease these effects of shrinkage, it is desirable to dry with moist air. This decreases the rate of drying so that the effects of shrinkage on warping or hardening at the surface are greatly reduced.