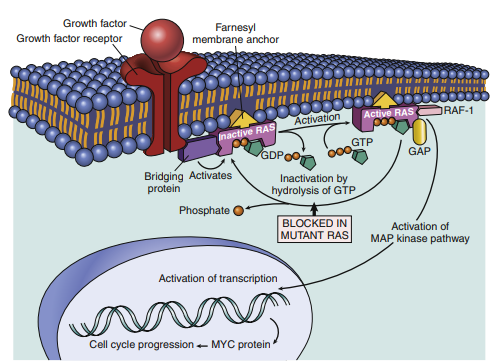 Signaling pathway: The activation and proliferation of antigen-stimulated T cell clones are required for an immunological response. Intracellular signaling is triggered by surface contacts, resulting in the production of a variety of proinflammatory cytokines, survival factors, and growth factors. Interleukin 2 (IL-2), a 15,500-kDa protein generated by activated T cells, is one of the most essential growth factors. The autocrine and paracrine activities of IL-2 are both presents. Activated T cells release IL-2, which binds to receptors on the same cell to promote T cell expansion and proliferation in autocrine signaling. Paracrine signaling occurs when soluble IL-2 reacts with adjacent activated T cells that express IL-2 receptors.IL-2 is also required for the survival and function of regulatory T cells that damper the response to self-antigens.

The activation of multiple signaling pathway by TCR–HLA and CD28–B7 molecules results in the translocation of three nuclear transcription factors (NFAT, NF-B, and an AP-1 complex comprised of Fos and Jun proteins). Transcription factors bind to the promoter regions of IL-2 genes in the nucleus, triggering messenger ribonucleic acid (RNA) transcription and IL-2 protein translation. The pathways involved in the synthesis of IL-2 are shown below.

The immunologic synapse, also known as the supramolecular activation cluster, is a structure that initiates TCR-mediated signaling (SMAC). The synapse is shaped like a b eye, with the engaged TCR–HLA class I or II molecules and CD28–B7 molecules grouped in the center, as shown in the diagram below.

Two views of the immunologic synapse in a T cell–APC (antigen-presenting
cell) conjugate (shown as a Nomarski image in panel C). Talin, a protein that associates with the cytoplasmic tail of the LFA-1 integrin was revealed by an antibody labeled with a green fluorescent dye, and
PKC-θ, which associates with the TCR complex, was visualized by antibodies conjugated to a red fluorescent dye.

A schematic view of the synapse,
showing talin and LFA-1 in the p-SMAC (green) and PKC-θ and the TCR in the c-SMAC (red).

The goal of molecular clustering is threefold: (1) TCRs have a moderate affinity for antigen-loaded HLA molecules. Despite the fact that these complexes only live for a brief time, they can send an activation signal to the nucleus. Successful T cell activation, on the other hand, necessitates the repeated and persistent interaction of TCR–HLA complexes. (2) Multiple TCRs engage with a small number of antigen-loaded HLA molecules on antigen-presenting cells in a clustered configuration (APCs). (3) Clustering also gathers numerous cytoplasmic immunoreceptor tyrosine-based activation motifs (ITAMs), which are required for downstream signaling, near adaptor proteins. Following the engagement of CD4 or CD8 with invariant HLA molecule domains, leukocyte-specific protein tyrosine (lck kinase) is activated and phosphorylates ITAMs. Activated ITAMs serve as “docking stations” for adaptor proteins.

One component of the AP-1 transcription factor complex necessary for the synthesis of IL-2 is a product of the Ras–MAPK pathway. Rat sarcoma protein (Ras) is a small G protein, which is regulated by guanosine diphosphate (GDP) and guanosine triphosphate (GTP) in the cytoplasm. GTP activates the Ras protein. Hydrolysis of GTP and removal of a phosphate inactivates Ras.

The activity of RAS genes is depicted in this model. Inactive (GDP-bound) RAS is activated to a GTP-bound state when a normal cell is stimulated by a growth factor receptor. RAS activation recruits RAF-1 and activates the MAP-kinase pathway, which sends growth-promoting signals to the nucleus. The active RAS pathway has numerous targets, including the MYC gene. Because the mutant RAS protein is unable to hydrolyze GTP, it remains active indefinitely, causing cells to be stimulated without the need for an external trigger. RAS’s activity is dependent on the farnesyl moiety attaching it to the cell membrane, and medicines that block farnesylation can block RAS activation.

In T cell activation, Ras transduces signals from the surface receptor to the theMAPKpathway.Hydrolysis of GTP is controlled by the presence or absence of Grb–SOS. When activated, Ras attaches to the membrane and undergoes a conformational change that allows the activation of MAP kinases. The principal kinase in the pathway is an extracellular signal-regulated kinase called ERK. ERK phosphorylates a small protein called ELK, which initiates the transcription of the Fos protein—one component of the AP-1 complex.

In T cell activation, the Ras–MAP kinase pathway is involved. When antigen recognition activates ZAP-70, it phosphorylates membrane-associated adapter proteins like LAT, which subsequently bind another adapter called Grb-2, which offers a docking site for the GTP–GDP exchange factor SOS. Ras GDP is converted to Ras GTP via SOS. Ras GTP triggers the activation of a series of enzymes, culminating in the activation of the MAP kinase ERK.

The Rac–JNK pathway activates the AP-1 complex’s second component (Jun protein). Vav, a GDP–GTP exchange protein, activates protein kinase B, commonly known as Rac protein kinase. Rac (GATP) activates the c-Jun N terminal kinase (JNK), which phosphorylates c-Jun and adds phosphate to it. The interaction of Fos and Jun results in the formation of a functional AP-1 complex, which serves as a transcriptional activator early on. AP-1 controls the generation of gene products required for T cell division and the production of interleukin-2 (IL-2).

In the calcium-dependent pathway, IP3 translocates to the endoplasmic reticulum and releases stored intracellular calcium. To maintain cellular homeostasis and replenish intracellular calcium stores, the cell activates a membrane ion channel called the calcium release-activated channel (CRAC), which allows an influx of calcium from the external milieu. Some calcium binds to a regulatory protein called calmodulin. The calcium–calmodulin complex activates a phosphatase called calcineurin. This enzyme activates the nuclear factor of activated T cells (NFAT) protein, which translocates to the nucleus.

T cell signaling downstream of PLC-γ1. The LAT (linker for activation of T cells) adapter protein that is phosphorylated on T cell activation binds the cytosolic enzyme PLC-γ1, which is phosphorylated by ZAP-70
and other kinases, such as Itk, and activated. The active PLC-γ1 hydrolyzes membrane PIP2 to generate
IP3, which stimulates an increase in cytosolic calcium and DAG, which activates the enzyme PKC. Depletion of endoplasmic reticulum (ER) calcium is sensed by stromal interaction molecule 1(STIM1), which
induces the opening of the calcium release-activated channel (CRAC) that facilitates the entry of extracellular calcium into the cytosol.

The third nuclear transcription factor, nucleotide factor–B (NF-B), is produced through the calcium-independent PLC1–DAG/ PKC pathway. Phosphokinase C is activated by membrane-attached DAG (PKC). Phosphates are added to a variety of distinct target molecules by the active PKC kinase, forming a trimolecular complex that removes an inhibitor from NF-B. NF-B is a pleiotropic transcription factor that encourages cell proliferation, survival, and the production of interleukin-2 (IL-2).

Activation of transcription factors in T cells. Multiple signaling pathways converge in antigen-stimulated T
cells to generate transcription factors that stimulate expression of various genes (in this case, the interleukin
2 [IL-2] gene). The calcium–calmodulin pathway activates NFAT (nuclear factor of activated T cells), and
the Ras and Rac pathways generate the two components of AP-1. Less is known about the link between T
cell receptor (TCR) signals and NF-κB activation.