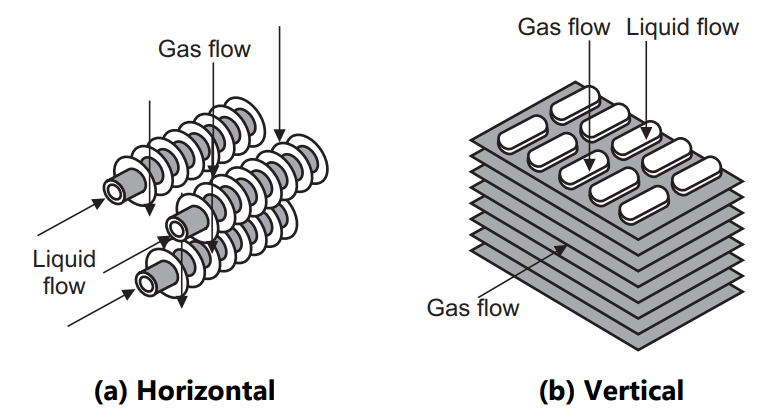 Finned Tube Exchanger: In a heat exchanger, while heating the air outside the tubes with steam inside the tubes, the steam side coefficient will be very high and the airside coefficient will be extremely low. While heat transfer, as the overall coefficient approximates that of the lower side (the airside coefficient), the only remedy to increase q is to increase the area term on the airside without putting more tubes in the heater. As we know, metals generally have high thermal conductivity, and the temperature of the metal surface rapidly approximates that of steam. If metal fins are attached on the outside of the tubes such that there is good contact between the surface of the tube and the base of the fin, the heat transfer surface area is increased. A wide variety of fins are used, as shown in the figure given below. Rectangular discs of metal may be pressed onto the tube at right angles to them. Spiral fins may be attached to the tubes. Transverse and longitudinal fins are other forms. The use of finned tubes greatly reduces the size of the apparatus. In cases where the heat transfer coefficients on the two sides are close, the question of where fins are to be attached is entirely one of economics in design. In certain cases, fins are used on the inside as well as the outside of the tubes.