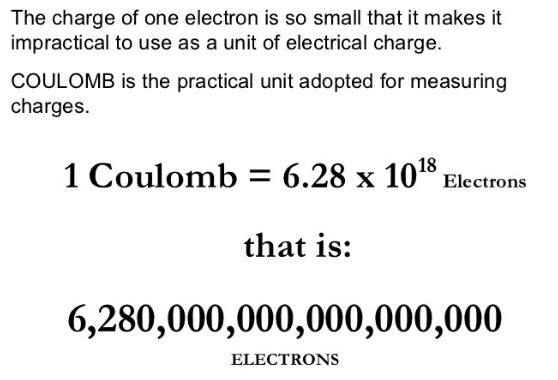 Determination of the charge on an electron: R.A. Milikan (1908) used what is known as the Milikan’s Oil-drop Experiment to determine the absolute value of an electron’s charge. The equipment he employed is seen in the Figure given below. He poured oil droplets into the device using an atomizer. Through a hole in the upper plate, an oil droplet falls. The air between the plates is then subjected to X-rays, which cause the air molecules to expel electrons. The oil droplet captures some of these electrons, giving it a negative charge. The droplet falls under the influence of gravity when the plates are earthed.

He adjusted the strength of the electric field between the two charged plates so that a particular
oil drop remained suspended, neither rising nor falling. At this point, the upward force due to the
negative charge on the drop just equaled the weight of the drop. As the X-rays struck the air
molecules, electrons are produced. The drop captures one or more electrons and gets a negative
charge, Q. Thus, Q = me

where n = number of electrons and e = charge of the electron. From measurement with different drops, Milikan established that electron has the charge – 1.60 × 10-19 coulombs.

Mass of an Electron relative to H

Avogadro number, the number of atoms in one gram atom of any element is 6.023 × 1023 . From this, we can find the absolute mass of the hydrogen atom.

Thus an atom of hydrogen is 1835 times as heavy as an electron.

Definition of an electron

Alternatively, an electron may be defined as A particle that bears one unit negative charge and mass 1/1835th of a hydrogen atom. Since an electron has the smallest charge known, it was designated as a unit charge by Thomson.

1 thought on “Determination of the charge on an electron”