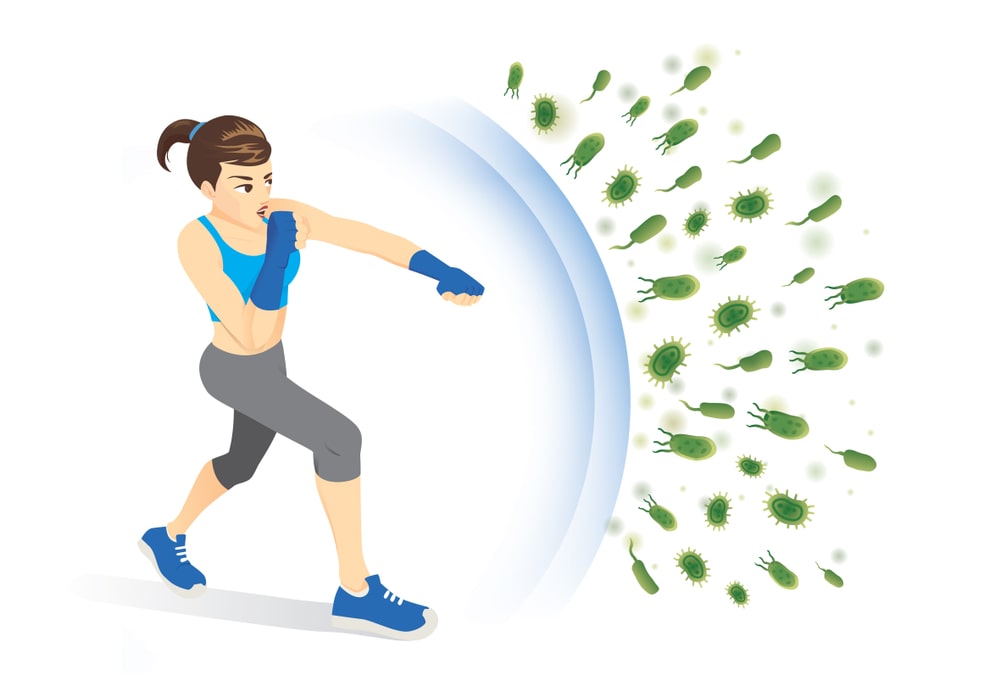 The immune system is made up of a network of blood vessels that circulate throughout the body.
cells, lymphoid tissues, and organs that react to exogenous substances soluble antibodies as a source of the material (humoral response) or lymphocytes and macrophages that have been stimulated (cellular response). Primary and secondary lymphoid tissue make up lymphoid tissue. organs. The thymus and bone marrow are considered. lymphoid organs are the primary lymphoid organs. The spleen, lymph nodes, and tonsils are all parts of the digestive system.

The development or maturation of red blood cells, white blood cells, and platelets are referred to as hematopoiesis. Hematopoietic stem cells migrate to the fetal liver in the third month of pregnancy.
Stem cells are found in the spleen later in pregnancy, where they mature. The majority of stem cells are present in the bone marrow after birth. Marrow is made up of a connective tissue framework called stroma that supports red or yellow pulp and is found also in tubular, flat, and long bones. Flat bones, such as the hip bone, breast bone, ribs, and vertebrae, contain red pulp, which is the main source of hemopoietic stem cells. The red pulp can be found in the cancellous material at the epiphyseal plate of long bones.

The main marrow ingredient in long tubular bones is yellow pulp, which is made up of aggregated fat cells.
Red pulp stem cells give rise to four types of cells: erythrocytes, platelets, myeloid cells (polymorphonuclear leukocytes, basophils, eosinophils, monocytes/ macrophages), and lymphocytes. Before being discharged into the bloodstream, these lineages mature in the bone marrow.

Polymorphonuclear neutrophils (PMN) (also known as polymorphonuclear leukocytes [PML]) make up 50–70% of the white blood cells in the peripheral blood. Ingesting and destroying foreign protein and bacteria is their primary job.
PMNs feature a nucleus with several lobes commonly separated into three or more segments.

Myeloperoxidase and lysozyme, which play important roles in the killing of intracellular microorganisms, are found in these granules.
Myeloperoxidase converts hydrogen peroxide to hypochlorous acid, which lowers pH and causes bacterial cell wall disintegration. Lysozyme is an enzyme that breaks polymeric 1-4 links in bacterial cell walls, disrupting their structural integrity.

Additional enzymes, including apolactoferrin and collagenase, are found in secondary granules, which inhibit bacterial development and promote PMN mobility. Apolactoferrin binds free iron and hinders the production of heme-containing proteins such cytochromes by bacteria.

Immunity and host defense are also aided by tertiary and secretory granules. Lysozyme and gelatinase are found in tertiary granules. Gelatinase enhances PMN movement by degrading ground material between cells. Vesicles secretory N-formyl-1-methionyl-1-leucyl-1-phenylalanine is excreted. (FMLP), a chemoattractant and activating peptide PMNs are aided by this agent.

PMNs are formed in the bone marrow and go through a seven-step maturation process from myeloblasts to mature cells that take 9 to 2 weeks. By connecting to the endothelial lining of the capillaries in capillary beds, mature cells entering the blood can either stay in circulation (circulating pool) or marginate (marginating pool). Selectins are molecules expressed by cells in capillary beds that selectively attach PMNs to the vessel wall.

PMNs “demarginate” and enter the bloodstream in response to infection or inflammation. At the same time, the bone marrow discharges a significant number of immature neutrophils into the bloodstream, known as neutrophilic “bands.” The inflow of immature band cells, also known as a left shift in blood cells by doctors, is a sign of an acute infection. PMNs have a half-life of one day in blood and five days in tissue.

Eosinophils account for 2% to 5% of all white blood cells in circulation. The presence of big reddish-orange (eosin staining) granules and bilobed nuclei distinguishes them. cytoplasmic refractive crystals. Eosinophils move to inflamed areas and discharge their contents. granules in the surrounding environment These are the contents of these Major basic proteins (MBP) and eosinophilic cationic proteins (ECP) are among the granules. Eosinophil-derived protein (ECP), eosinophil peroxidase (EPO), and eosinophil-derived neurotoxin that has been derived (EDN). Extruded granules are a type of extruded granule. A viable option for eradicating big extracellular pathogens Phagocytic cells are unable to consume it.

Basophils constitute less than 1% of circulating leukocytes.
They are small cells that have multi-lobed, heterochromatic
nuclei and are easily stained with acidic or basophilic dyes. Basophils are one of the major effector cells in skin allergic reactions and termination of helminth infections.
Cytoplasmic granules contain histamine, heparin, and tryptase.

Mast cells are distributed beneath the epithelial linings of the
skin and of the respiratory, intestinal, and genitourinary tracts.
Although they have similar morphologies, mast cells are not basophils. They are derived from a different progenitor,
have a different natural history, and express different
cell surface markers.
Cytoplasmic granules are normal constituents of mast cells
and contain the same inflammatory mediators as basophils.
When released from mast cells, the inflammatory mediators
facilitate allergic reactions in the respiratory tract and the
intestine.

Eosinophils account for 2% to 5% of all white blood cells in circulation. The presence of big reddish-orange (eosin staining) granules and bilobed nuclei distinguishes them. cytoplasmic refractive crystals. Eosinophils move to inflamed areas and discharge their contents. granules in the surrounding environment These are the contents of these Major basic proteins (MBP) and eosinophilic cationic proteins (ECP) are among the granules. Eosinophil-derived protein (ECP), eosinophil peroxidase (EPO), and eosinophil-derived neurotoxin that has been derived (EDN). Extruded granules are a type of extruded granule. a viable option for eradicating big extracellular pathogens Phagocytic cells are unable to consume it.

Some circulating monocytes become fixed macrophages after migrating into tissue. These macrophages are mostly found in bone, liver, brain, and connective tissue, which are the places where bacteria are most likely to penetrate tissue. Tissue macrophages are frequently given names based on where they are found. Osteoclasts, for example, are found in bone, microglial cells in the brain, and histiocytes are found only in connective tissue. An inflow of monocytes or the growth of tissue progenitor cells replenishes tissue macrophage numbers every 6 to 16 days.

Lymphocytes make from 20 to 45 percent of all circulating white blood cells. Lymphocytes are classed as tiny lymphocytes or large granular lymphocytes based on their size and staining patterns. Small lymphocytes are characterised by large, darkly stained nuclei, sparse cytoplasm, and the absence of granules. The majority of tiny lymphocytes reside in secondary lymphoid tissue (such as the spleen or lymph nodes). At any given time, just 2% of these cells circulate in the peripheral circulation. Big granular lymphocytes (LGLs) are bone marrow-derived lymphocytes with large nuclei, abundant cytoplasm, and numerous azurophilic granules. LGLs act as natural killer cells (NK cells), inducing apoptosis in virus-infected cells and tumour cells. Lymphocytes have a half-life of several
weeks to years.

Small lymphocytes are divided into T and B cells on the basis
of differentiation in the thymus (T cells) or in bone marrow
(B cells). T cells are involved in the apoptosis of tumor
cells, inflammatory responses to intracellular bacteria, and
immuneregulation. B cells differentiate into plasma cells
that produce soluble, protein antibodies directed toward
foreign protein, carbohydrates, and extracellular microbial
pathogens called antigens.
T and B cells cannot be distinguished by light microscopy,
since all small lymphocytes have the same morphology. The
presence of surface glycoproteins and glycolipids, called cluster
of differentiation (CD) markers, is used to identify T and
B cells. All T cells express CD3, which is part of a TCR that
interacts with antigenic fragments. Each lymphocyte
has only
a single TCR type and recognizes only one antigen.
Within the T cell population are several subpopulations
with different immunologic functions. T cells are
classified into helper/amplifier (CD4) cells and cytotoxic (CD8)
cells. On the basis of cytokine production patterns, several
CD4 subsets have been defined. For example, one population
of CD4 T helper 2 (Th2) cells assists B cells in the production
of antibodies. A second CD4 T cell amplifier (Th1) cell population
generates inflammatory responses to foreign material.
Two subpopulations of CD8 cytotoxic T cells have been
identified as well. Following stimulation, CD8 Tc1 induce apoptosis
in tumor cells and virus-infected cells. The other population
of CD8 Tc2 cells has limited cytolytic capacity but secretes
proteins that inhibit cellular division or viral replication.
When infection of critical, nonregenerative organs (e.g., brain)
is present, Tc2 cells inhibit the replication of tumors or viruses
without destroying infected cells and tissue.
All B cells express CD19-21 cell surface markers. B cells must
differentiate into plasma cells before producing antibodies.
Plasma cells contain more condensed, eccentrically placed
nuclei and abundant cytoplasm. These cells also develop ribosomes
and a large rough endoplasmic reticulum, as well as the
Golgi apparatus, which is used for antibody secretion. Plasma cells are usually found in lymph nodes. Less than 1% of the total plasma cell population is found in peripheral
blood.

NK cells are large granular lymphocytes that express markers
found on both T and B cells. Most NK cells are neither
T cells nor B cells and may represent a third cellular lineage
that expresses CD16 and CD56. A small population of
T cells also functions as NK cells. NK cells
play a role in the apoptosis of virus-infected cells and tumor
cells.